The controversial plan to abolish the awarding of competition points until the age of 13 and tackling until midway through the under 7s for rugby league matches has encountered official resistance after Souths Juniors refused to adopt the edict.

The NSWRL is in the process of rolling out the NRL’s nation-wide policy, which has already been implemented across Queensland and some parts of NSW. The changes – which require youngsters to play a non-contact version of the game such as League Tag and abolish competition ladders and grand finals – have infuriated some within the junior ranks.

A petition on change.org calling for the overhaul to be scrapped has received more than 7000 signatures. However, the first official opposition has come in the form of the influential South Sydney District Junior Rugby Football League, who on Wednesday informed the NSWRL in writing they would not implement the changes.

“We’ve let them know it’s our intention to continue on as we have previously.

“We’ve always played competitively. We sought the feedback from our clubs about it and they love having grand final days. We understand that winning and losing is part of life. 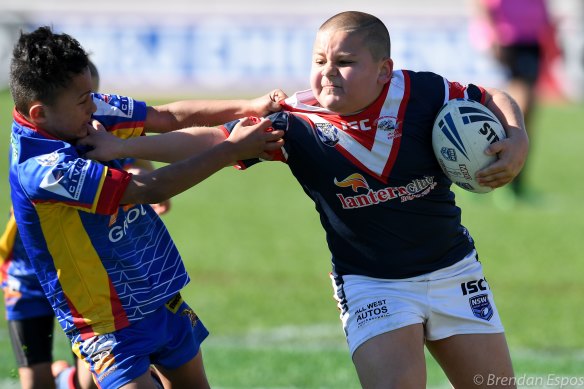 Young players in action in the Canterbury Junior League.Credit:NRL Photos

“We want to continue to play rugby league like we have in the past.”

The NRL introduced the protocols in the belief it was the best way to boost participation while protecting the welfare of young participants. However, Curry said there had been a boost of 100 additional players, up to 3100, for his association last season. He added that touch and tag versions of the game were also available to children whose parents were concerned about tackle-related injuries.

“In my opinion, why change something that’s working for us?” Curry said. “They may say that participation levels are sliding, but we’ve had a growth in the last 12 months.

“We understand that winning and losing is part of life …we want to continue to play rugby league like we have in the past.”

“Not as many people play the game as they used to, I understand that. But in my opinion, the game is not for everyone.

“It can be a very full-on contact sport later in life and not everyone is capable of playing it. I hope this doesn’t come across negatively, but I don’t think we should be trying to get everyone on board, we should be looking after the ones already playing and continuing on without altering the fabric of the game.”

Sources with knowledge of the situation have told the Herald that several other associations, unhappy with the changes, are also considering their options.

The ARLC approved the new player development framework in 2019, but COVID-19 stalled its official introduction. The changes were put forward by a steering committee of league experts including NRL coaches, former players and senior management.

“TackleReady is our program that teaches correct and safe tackle techniques, preparing participants for tackle versions of rugby league,” an NRL spokesperson said.

“The program aims to provide participants with a systematic introduction to tackling and being tackled, leading to a greater level of enjoyment.

“TackleReady is based on research, trials and feedback, the results of which found 85% reported increased confidence and 86% increased competence.

“It also provides entry-level club coaches with the necessary skills and gives parents peace of mind by highlighting the game’s commitment to offering a safe, inclusive environment.

Despite their concerns, some associations may fall into line with the NRL’s protocols to ensure they continue to receive their required funding.

“That’s not an issue for us here,” Curry said.

“We have a licensed club built for junior league, so we’re lucky compared to a lot of other associations. It wouldn’t be a money factor around any ramifications for us.”