Just like some of the acting we've seen on-field in the past few weeks, the hysteria around staging has been overplayed.

Clearly, we don't want to become like soccer, with players diving for penalties – or, in our game, free kicks – but let's put it all in perspective. 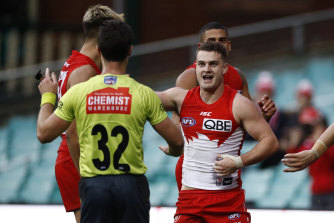 No player should ever be suspended for staging. In the bigger picture, under no circumstance is staging equal to an intentional strike or a head-high bump.

Some of the game's toughest players would admit to playing for free kicks.

At times, Gary Ablett snr did it. I could pick moments Matthew Lloyd accentuated contact and I know I was guilty at times as well. Stephen Silvagni, Alex Rance, defenders, forwards or midfielders – no one is completely blameless.

Callan Ward in my view is one of the most courageous players in the game, and even he admitted to exaggerating contact recently against Essendon.

There are probably three separate actions that make up 'staging' as a whole. There's making the most of high contact; diving or propelling yourself forward in a marking contest; and then there's flopping, say when two players are having a push-and-shove.

In the past week, we've seen two of those examples with Richmond pair Dylan Grimes and Nick Vlastuin.

Vlastuin's reaction I can understand. The contact from Tom Bellchambers mightn't look like much in slow motion, but, in reality, what appears to be 'low' impact can be very different. Vlastuin's reaction was instinctive, and not necessarily 'staging' as such, because there was contact.

The Grimes incident, on the other hand, is the type of action that needs to be stamped out. Like the other highly scrutinised incident involving Tom Papley a few weeks earlier, it's an action designed to con the umpire.

The tribunal's decision to dismiss Grimes' charge was wrong. While he might have copped a separate staging fine last year, it's pretty obvious he plays the game in the right spirit. Even the most one-eyed Bombers supporter would admit Grimes is an honest and fair footballer.

Still it has sparked a staging discussion this week and Chris Scott's comments were intriguing. He doesn't know the answer but thinks fines are a "juvenile" way of dealing with issues.

And in the case of Grimes, I reckon he'd be more hurt by any staging stigma than a fine or suspension. There are few tags worse than being known as a stager. He would have thought about that moment over in his head and will probably alter his on-field actions in future.

For me, there's got to be a greater onus on the umpiring. Yes, the whistleblowers have a hard enough job as it is, but, in those moments, they simply can't be sucked in.

If the umpire has any inkling that a player has overplayed an incident, simply don't pay the free kick. Even if the free might be there, I'm prepared to say the game's stagers don't deserve to be rewarded.

Too often we see free kicks or reversals when the retaliator gives a little shove to their opponent. Those decisions, where a player has, for example, clearly had their head taken off and then has the free kick reversed for a small push, must be eradicated.

Despite the urge to stamp their authority, the umpires must hold their nerve. Err on the side of caution. Make absolutely sure there has been a clear infringement. Last week Lachie Neale pushed a St Kilda player in the chest and technically there was probably a 50-metre penalty there. But I was happy the umpire didn't pay it because of the exaggeration of the contact. The game is grey enough as it is.

That being said, this is not the epidemic it's been made out to be and we don't need another reactionary overhaul of the tribunal system in response. Let's just use some common sense, both with umpiring and how we assess those incidents in the match review process.

These players are putting their bodies on the line and making instinctive or split-second decisions. Some will overstep the mark, but they will be rightly called out. Our game is the toughest in the world, and we should never forget it.