A shattered Adam Doueihi has revealed former Wallabies coach and his cousin Michael Cheika was one of the first people to offer support after his emotional on-field breakdown as the pair prepare to clash at NRL level.

The Lebanon international, who was in tears following the Tigers' demoralising loss to the Knights last week that came just days after a deadly blast in Beirut killed more than 100 people, says he is refreshed after being inundated with support from inside and outside the NRL. 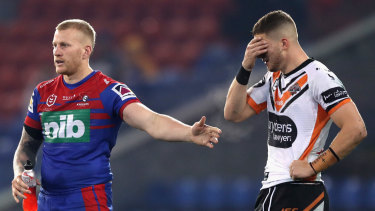 "We're a tight-knit community, resilient people over in Lebanon and I know the Lebanese community here is going to do as much as they can to help send stuff over and rebuild the country. We'll be back."

Doueihi looms as a wildcard for the Tigers as they seek to end a finals drought stretching back to 2011.

Their last-gasp win over the Bulldogs has kept their faint finals hopes alive, but they will need to beat the Roosters, the two-time defending premiers, to keep pace with the Rabbitohs and Sharks.

Cheika crossed codes and joined Robinson's coaching staff after the Wallabies bowed out of last year's World Cup as Doueihi weighed up interest from the Tricolours before his off-season switch to the Tigers.

Cheika even spoke to Doueihi about the prospect of heading to Bondi and will sit in Robinson's coaching box for the clash at Leichhardt Oval on Saturday as a member of the Roosters' biosecurity bubble.

"He's loving it," Doueihi said of Cheika's league switch. "It's a new experience for him. He's never been in an NRL system and I know he likes learning new ideas and I guess to work under Robbo, who has gone back to back … there's no better bloke to learn off.

"He was in my ear a bit [over summer], even when I finished school and he was the Wallabies coach he was always open and honest with me about whether to go to union or league.

"He called me last weekend and was asking for my game plan already. I'll chat to him during the week and try to get the inside scoop and pass it onto 'Madge'. I'm glad he's in the bubble with them, he's a big figure not only in union but also in league."

The Tigers will play competition heavyweights the Panthers after the Roosters clash and still have matches to come against the Storm and Eels.