After the Raiders were heavily defeated by Parramatta on home soil in round six, coach Ricky Stuart called Josh Hodgson into a meeting and delivered some home truths.

Stuart told the hooker he would be dropped to the bench for the game against the Cowboys, highlighting a few deficiencies in the Raiders’ game that he hoped young Tom Starling would help rectify. 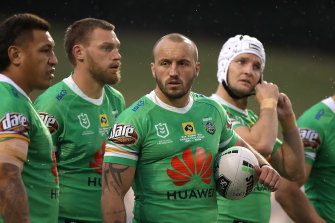 Josh Hodgson stood down as captain a fortnight ago.Credit:Getty

What is believed to have infuriated the Raiders hooker, as much as what Stuart thought of his performances, was the fact he’d heard the same things the night before on Fox League’s NRL 360 from some of the game’s most senior journalists. They included comments such as: “He tries too hard. He interferes in [Jack] Wighton’s space. He overplays his hand. They’ve got three halves.”

Most observers would argue they are valid points for discussion, but the fact they were aired on television amplified a view from the Englishman that the narrative around his negative influence on the team was an inside job.

Stuart privately denies playing any part in it. But to say the conversation between him and Hodgson became heated would probably be an understatement.

One version of events is that Stuart wanted to take the captaincy off Hodgson for one week, but the hooker told his coach that if he didn’t want him to lead the team in the bad times, he wouldn’t lead them in the good times.

There is also a version that suggests Hodgson made the decision on his own and told Stuart he would no longer co-captain the team alongside Jarrod Croker. Hodgson then insisted that he tell the players in a team meeting he was no longer their captain.

The reason the story is coming out now is because two days after he stood down as skipper, the 31-year-old suffered a calf injury at training that resulted in him missing the team’s 26-24 loss to the Cowboys in Townsville.

The Herald contacted the Raiders on Tuesday morning after learning of rumblings around Hodgson’s future. The club was already aware of interest from rival teams but his management had not reached out to gain permission to speak with other clubs.

There have been signs of discontent towards the coach within the playing group. Joseph Tapine’s wife Kirsten took to social media during the week and voiced her frustrations. There are also whispers that another partner of one of the team’s best players took aim at Stuart on social media. 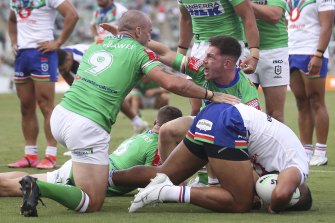 Josh Hodgson and Tom Starling celebrate a try against the Warriors in round three.Credit:SMH

Then there's the uncertainty surrounding the future of George Williams, who is suffering from home sickness as his partner awaits the birth of the couple's first child.

From the outside, it appears to be unravelling in the nation’s capital, but any suggestion that Stuart is under pressure to keep his job is off the mark.

On Wednesday, the club tried to allay concerns of unrest within the playing ranks, putting out a statement after days of headlines about the team.

“I’ve made the decision to stand down as club captain and I informed the team of this a couple of weeks ago,” Hodgson said.

“I’ve been out injured for the past two games and I’ve been working hard on getting myself back on the training field. I’m confident I’ll be ready to play again when we play the Bulldogs next weekend.

“I can assure everyone that I remain fully committed to the club and I’m looking forward to getting myself back to 100 per cent fitness and helping the team get their season back on track.

“I know internally we’re all working extremely hard to turn things around and the playing group and staff have been fully committed to each other and the club.”

The rise of back-up hooker Starling is believed to be a sensitive topic. He led Canberra to 11 wins from 14 games when Hodgson was injured last year. It’s the reason there is now conjecture over whether Hodgson will see out the final year of his $800,000 contract.

The Broncos have held internal discussions about luring him north of the border, and Manly and Canterbury would also be expected to join the conversation should he be looking for a new home.

The reason the Broncos discussed Hodgson was due to a belief he and the Raiders were not on the same page about his future. That now seems to be correct.

Canberra’s success over the past few seasons has been largely built on recruits from Super League. But the club’s English affiliation is not as strong as it once was.

Back-rower John Bateman returned home in the off-season, and fellow countryman Williams could be on the way out if the Raiders find a suitable replacement. Then there’s the Hodgson situation.

Canberra want to put this to bed. However, the statement they sent out on Wednesday morning, which doesn’t actually explain why Hodgson stood down as captain, may not be the end of the matter.