Of all the off-season indiscretions committed in the past few weeks, the one that angered many former players the most concerned Panthers players breaking the premiership trophy, then placing the statue in a pram, then posting the video on social media.

It didn’t speak to the act itself, but rather the deep admiration for Norm Provan and Arthur Summons. Disrespect the trophy and, well, you’re pretty much disrespecting two giants of the game.

“As someone who’s admired those men throughout my broadcasting career, I am greatly offended that these idiot players don’t understand the concept of respect for the game, and respect for two gladiators,” 2GB broadcaster Ray Hadley said during the week, speaking for many of us.

Provan, 88, died on Thursday morning after a long battle with dementia. Summons, 84, passed away in May last year.

The problem with Immortals like Provan, and immortal images like Sun-Herald photographer John O’Gready’s famous picture of the pair embracing in the mud after the 1963 grand final, is that you think your heroes will live forever.

Alas, they’re just men who eventually yield to time like the rest of us. Bob Fulton, Tommy Raudonikis, now Provan, the spiritual leader of the Dragons, all in the one year. 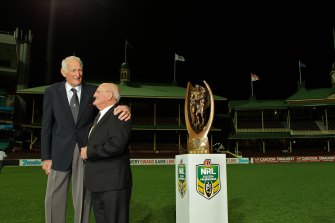 Norm Provan and Arthur Summons with the NRL trophy.Credit:Fairfax

The tributes are rightfully flowing for Provan today and every Panthers player should probably read them.

“There’s not many of us left,” former winger Johnny King, 79, who scored a controversial try in that decider, said of the legendary St George players who won 11 straight grand premierships from 1956 to 1966. “Johnny Raper is in a nursing home. So is Billy Smith. We lost Eddie Lumsden last year.”

For young-ish Dragons supporters like this author, we only know of their exploits from grainy footage from the day, or superb books like Larry Writer’s Never Before, Never Again.

Provan played in 10 of the Dragons’ 11 straight grand final wins, including four as captain-coach, starting in 1962 when he took over from “Killer” Ken Kearney. 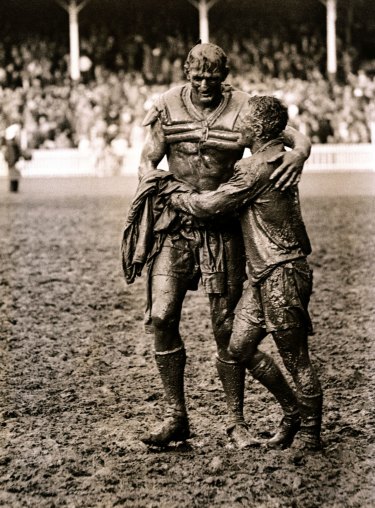 “Norm was a gentle giant,” King reflected. “Everything was about discipline at St George and nobody was bigger about it than ‘Sticks’. You started training at 5.30pm and you went until the lights went out. Then we’d all walk off together. He was under a lot of pressure when he took over from Killer, but he continued to set the highest of standards.”

Provan’s health had been a source of speculation for some time. He slipped out of the public eye years ago but had for years, alongside Summons, fulfilled every request from the NRL to promote the game.

“I don’t feel a sense of obligation,” Provan told me in an interview with both him and Summons in 2008. “But I feel a sense of squaring up. I like to give as much as I get out of anything. I played 16 years with St George. We didn’t get much out of it. What I got out of it was a lot more than a lot of others did. Just because of that photograph.”

The pair hardly knew each other when O’Gready took the picture of them in the mud in 1963, although the moment was the start of a lifelong friendship.

In the years that followed, as the image became the Winfield Cup, then evolved into the NRL premiership trophy after a ban on smoking advertising was introduced in the 1990s, they became close.

“I don’t think a lot of people realise how much the body has to take to get to the top,” Provan said. “Footballers do plenty of damage to it getting there. There’s no way you can value that, later in life, after all the playing is done. I’m not whingeing about it. I’m just alerting you to the fact it’s not a bed of roses.”

Talk then turned to the controversial 1963 decider, which was played in conditions so atrocious that Provan walked from the field early in the second half and dipped his muddy head in a bucket of water, before returning to the field of play.

Wests players still howl about some of the decisions of referee Darcy Lawler, as Summons did that afternoon when I spoke to them.

Provan just grinned down at his little mate, just as he had after the grand final that day with his arm slung around him.

“Mate, they haven’t changed the score,” he said.

Didn’t see that one coming!

For their part, the other 16 clubs are torn about the merits of a new team.

While some clubs acknowledge the great job head office has done in navigating the past two COVID-stricken seasons, they are concerned at the lack of transparency around “the process”.

There’s also plenty of talk about the showdown between V’landys and Souths chief executive Blake Solly at last week’s meeting between the NRL and club bosses.

Solly raised questions about the memorandum of understanding struck in 2016 which meant clubs would be given an annual grant of 130 per cent of the player payments plus an additional $1.5 million per club from 2023.

According to numerous people in the meeting, V’landys grew tired of being questioned by Solly and eventually accused him of being a “flea f—er”.

Now that’s a term I haven’t heard before but certainly intend to use at the appropriate time in the future.

“I had to Google it after he said it,” one powerbroker laughed.

According to Urban Dictionary, to be “flea f—ed” means you’ve been ripped off by someone beneath you. Others suggest it relates to people being concerned about the things that don’t really matter. I feel seen.

V’landys also questioned why Solly was being so “combative”, which surprised a few people given he’s renowned for enjoying a fight more than a feed.

He confirmed the remark when contacted but politely declined to elaborate while Solly would only say this of Redcliffe getting the green light: “We were given a commitment that the 17th team would improve the financial position of the existing 16 clubs. We’re really looking forward to them confirming that in the future.”

Everest slot holder and larger-than-life Kings Cross identity Max Whitby has revealed how close he went to having his leg amputated earlier this year.

Whitby, who has a live chance in the $15m race with Masked Crusader ($9.50), slipped on a footpath on Bayswater Road in late February just days before his 70th birthday and badly broke his left ankle.

“I’d been off the drink for a month,” he told us, which probably explains why he was so unbalanced.

He was taken to St Vincent’s Hospital for surgery, with plates and pins inserted, but weeks later a serious infection forced him back into hospital. 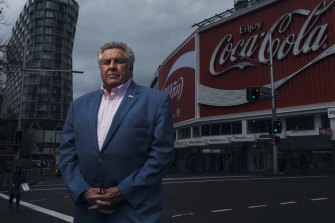 He spent three weeks in intensive care and had a further 11 operations in 17 days. When he finally emerged from hospital six weeks later, one of the doctors told his this sobering news: “You could’ve lost your leg up to your knee”.

Big Max was in high spirits when I tracked him down this week, although he says he’s still in pain.

“I worked around the Cross a lot of my life, so I’m used to getting bones broken,” he said. “Nose, cheekbone, sternum, legs, elbows, God knows how many teeth … But you don’t go to hospital to get sick.”

I know who’ll be crook if Masked Crusader salutes: the bookies.

“You know, I don’t know.” — Philadelphia 76ers coach Doc Rivers on whether Ben Simmons will play for his side this season. Pretty much sums it up.

THUMBS UP
He didn’t win in the fifth as exclusively and incorrectly predicted in this space a week ago, but Tyson Fury’s 11th-round knockout of Deontay Wilder to retain his WBC heavyweight world title was the full stop on a remarkable fight. One of the few times when the pre-bout hype matched the contest.

Which former NRL club chief executive with a penchant for homophobic slurs is calling journalists looking for a favour to promote himself and his business? Some of us have longer memories than he does.

It’s a big weekend for … our man Jordan Mailata, whose Philadelphia Eagles come up against Tom Brady’s Tampa Bay Buccaneers in the NFL on Friday. The former South Sydney Rabbitoh made some errors in his return from injury last week while playing at right tackle.

It’s an even bigger weekend for … the 10,000 souls who will celebrate our newly acquired freedoms by dressing in ill-fitting suits and expensive couture before jamming into Royal Randwick like sweaty hogs to place money on horses they know nothing about before trying to find a taxi out of the joint. Good times at The Everest.