London: England’s Rugby Football Union chief executive Bill Sweeney stopped short of giving Eddie Jones his unconditional backing ahead of what he promised would be a “brutally honest” debrief of a disastrous Six Nations campaign.

Sweeney made no secret of his “extreme disappointment” at England’s fifth-place finish, after losing to each of Ireland, Scotland and Wales for the first time since 1976. 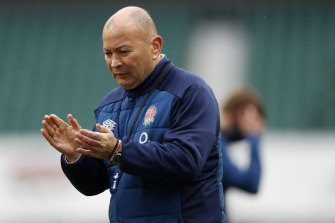 Eddie Jones’ England lost to Ireland, Scotland and Wales for the first time since 1976.Credit:AP

Sweeney, whose email account has been inundated with supporters’ complaints, insisted the review would lift the lid on the failings. “It will be a thorough, brutally honest analysis of what went wrong and why, and what the issues are,” he said. “We certainly don’t want it to be an opportunity to wallow in excuses.” The results of the review will be announced in mid-April.

Sweeney was at pains to highlight Jones’s past achievements, including three Six Nations titles and a World Cup final appearance. In the short term, he said he would apply a “bit of good old English calm”. However, when asked whether Jones could lose his status as the highest paid coach in international rugby, Sweeney did not give total support.

“I don’t think I could honestly answer that one,” he said. “I spoke to him on Sunday. He’s as disappointed as we are, he’s hugely competitive, and we will do this debriefing session together as a panel and see what we learn from it.

“We want to get to the heart of any concerns, and the job of that panel is to summarise all the information and take that recommendation to the RFU board. And if there are any further conversations required as a result of the finding, then we’ll do that as well. That’s the only real honest answer I can give.” 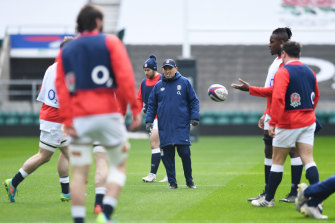 The RFU has refuted suggestions that Jones has too much power at Twickenham.Credit:Getty

Jones’s past accomplishments will count for only so much, and Sweeney indicated that he must convince him that England remain on track for the 2023 World Cup.

Even if the team are in transition, as Jones has suggested, Sweeney said it was vital to “make sure you are heading in the right direction”. Jones himself indicated to Sweeney that he had no desire to paper over the cracks as England slumped to a 32-18 loss to Ireland after the high of their 23-20 win over France.

“He’s hugely disappointed,” Sweeney said. “You would expect that. He is equally frustrated at the inconsistency of the performance against France, and a week later you have a performance which is very disappointing.

“It’s important to stress that Eddie’s not in denial. He’s not quoting his win ratios, or previous tournaments, or his record up to now. He’s totally focused on the now and going forwards. He knows it’s going to be a thorough and brutally honest debrief. We need to get to the facts of it. We need to lift the hood up, have a look in there and say are we headed in the right direction?”

There have been questions, notably from 2003 World Cup-winning coach Clive Woodward, about how hard the RFU intends to hold Jones to account and whether it has the necessary rugby expertise to do so.

Conor O’Shea, the RFU’s director of performance rugby, will sit on the panel. Last summer, he co-hosted a podcast with Jones and yesterday launched a stringent defence of the head coach’s desire. “He’s up for the fight, big time,” O’Shea said. “And no one is trying to sweep anything under the carpet.”

Sweeney rowed back on the suggestion that Jones held too much sway within the RFU to face any meaningful consequences.

“I would say that is wrong,” Sweeney said. “I would look them straight in the eye and say that is absolutely not the case. I know some people feel that is the perception, but he doesn’t have power and influence within Twickenham.

“There is massive accountability at the moment. But you have also got to allow your head coach to get on and do what he has to do. But Eddie is incredibly transparent with us, in terms of his thinking, his plans, where he’s going. And there are challenges to that.”

Sweeney was also prepared to censure Jones for his outburst last week in which he accused the media of spreading “rat poison”.

“Yeah, I didn’t like that, I don’t think anyone welcomes that,” Sweeney said. “That doesn’t really help the cause. And we have had a chat about it.”

Meanwhile, the leading domestic candidate to replace Jones, Exeter director of rugby Rob Baxter, confirmed he intended to see out his contract that runs to 2023.

“When I shake hands with Tony Rowe [Exeter chairman], when he says will you be here for the next three years and I say yes, that means a lot to me as well,” Baxter said.