If Rob Penney wanted job security, he might have gone to Canberra, a town where you can do pretty much anything and not get the sack. Instead, he finds himself in Sydney where, just three weeks into the season with the Waratahs, he finds himself in the gun for not just a local but a national rugby panic.

Penney’s Waratahs have a bye this weekend. The way they’re going, they might even make a mess of that. The board of Rugby NSW is being pressured to examine Penney’s position, if for no other reason than somebody has to be seen doing something. And they say it’s Penney who lacks imagination. 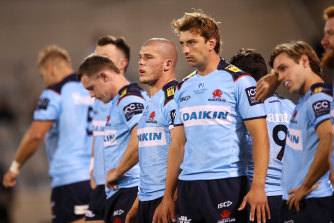 The Waratahs are not a bellwether for rugby as a whole in Australia.Credit:Getty

This reasoning runs counter to one of the underpinnings of the Stan-Rugby Australia partnership, which is the conviction that the tribal loyalties underpinning rugby can beat like a heart pumping blood out to the limbs. If the pull of tribalism is real, then people will still watch their team, win or lose.

Or maybe the confidence in that loyalty, when it comes to the Super teams, is more a wishful thought than a reality? Are rugby fans the fair-weather variety? If so, all Stan needs to do is contrive a sport where everybody’s team wins and everybody’s happy.

If TV ratings for an important team were critical to the game’s survival, then the National Rugby League would have acted to resuscitate the Brisbane Broncos, its most-watched team, which won last year’s wooden spoon. Instead, league and its broadcaster (hey, also the owner of this masthead!) are going to inflict the Broncos on us until they, or we, die from exposure. Rugby, with a new deal and a shakier financial foundation, can’t afford to show its followers such unconcern.

Elsewhere, the nervousness about NSW rests on an illusion that the state is no longer producing high quality rugby players. It is, only it’s producing them for the other provinces and for teams in Japan and Europe. Sydney private schools remain the generator of rugby talent, wherever it ends up. If it’s not ending up with the Waratahs, that has been the result of management decisions and financial forces that long predated poor old Rob Penney. 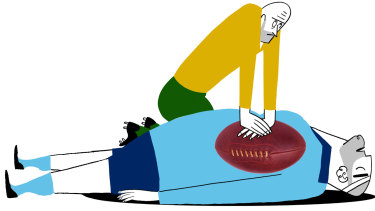 If Australian rugby is coming to an epiphany, it’s not that the Waratahs can be fixed by dumping their coach. It’s the same lesson that the Warsaw Pact countries learnt by manufacturing Lada cars and Ural computers. A protected, insular economy is a fools’ paradise. (Better to be in the AFL or NRL where, in splendid isolation, claims that the game is improving every year can go un(con)tested!)

Due to COVID-19, the players have been starved of broader competition. That, not the inexperience of the Waratahs, is the main threat to the standard of Australian provincial rugby. Insularity weakened Australian rugby for decades up to its revival in the 1980s, and a closed system can only set the Wallabies up for a rude shock later in the year.

So what can the Waratahs do? It’s hard to see anyone being taken in by the public relations exercise of sacking the coach. Penney’s key playing personnel fled before his arrival. The Waratahs would appear the weakest Australian Super team on paper, and so are they performing. Penney created precisely nothing of this situation. Nobody’s heart is bleeding for the Sydney blazers who are mistaking their disappointment for a national crisis.

It’s the Waratahs’ turn to do what the other provinces have had to do, and tough it out with the resources they have.

If concern about the progress of the overall Australian code is at issue, the sooner circumstances allow a resumption of international competition the better. Only when the Australian provinces face up to the New Zealand teams can they really start worrying about how far behind they’ve fallen.