Sam Walker suddenly has some hot competition for NRL rookie of the year honours.

Reece Walsh, just 18 years of age like Sydney Roosters sensation Walker, was nothing short of outstanding as he inspired the New Zealand Warriors to a 30-26 win over the Wests Tigers. 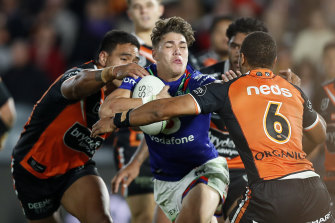 Rookie sensation Reece Walsh starred for the Warriors as they held on for a four-point win over the Tigers in Gosford.Credit:Getty

At least that will now mean the locals get to watch more of Walsh, who wore the No. 17 jersey but started at fullback in place of skipper Roger Tuivasa-Sheck.

Tuivasa-Sheck was bumped to the wing and scored a first-half try from a Walsh cutout pass, and said during a half-time TV interview: “He’s killing it … the crazy thing is he’s still going to grow, and the whole NRL should be excited.”

The Tigers were well aware of Walsh given they made inquiries about him when he was at Brisbane over the summer. The Broncos were keen for Billy Walters to join his father and coach Kevin at Red Hill, and the only player the Tigers were prepared to entertain as part of a swap deal was Walsh.

Walsh made the mid-season switch to the Warriors, but after just five games is clearly a star of the future. 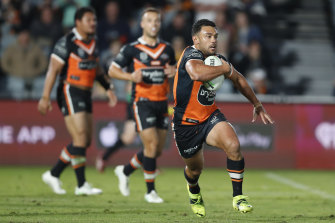 David Nofoaluma’s pass to Adam Doueihi was unable to secure rare back-to-back wins for the visitors.Credit:Getty

He poked out his tongue and dived high into the air to score in the corner before half-time.

He tried a cutout pass for Tuivasa-Sheck only to see it knocked down by Tommy Talau. The next set Walsh went for the identical play, except this time put a bit more loft on the ball that evaded Talau and landed in Tuivasa-Sheck’s chest to score.

The Tigers will be bitterly disappointed they failed – again – to string two wins together. Their fans have not celebrated two weeks in a row since rounds six and seven last year.

They started the game well with an early double to Luke Garner, and reclaimed the lead midway through the second half as poor discipline and a couple of sin-bins had the Warriors on the back foot.

But the Tigers failed to deliver the knockout punch when required.

Doueihi was shifted to centre during Magic Round, and while the move worked a treat last weekend, he failed to see much ball against the Warriors. His frustration after the siren was not just about missing Nofoaluma’s final pass.

It was the Tigers left edge that leaked way too many points again, especially in the first half when Tuivasa-Sheck and Walsh went hunting.

Joey Leilua and Talau were caught out too many times. Tuivasa-Sheck stood up Leilua and danced down field before he snuck a pass for Jack Murchie to score.

Leilua later came from the field for a HIA after he face-planted the turf when trying to pull off a big hit on Walsh after he had caught the ball, only to miss and go straight over the top of him.