Their jerseys once again bore the name of legendary sponsor Canberra Milk – but it was the Raiders’ on-field exploits that evoked the spirit of 1994 on Sunday as they steamrolled Wests Tigers to get their season off to a flying start.

Heavy favourites, the stage was set for Ricky Stuart’s green machine as 16,000 fans came through the gates at GIO Stadium – the largest crowd for a Raiders season opener since 2012. And they were rewarded with a vintage performance, a 30-12 win and two premiership points. 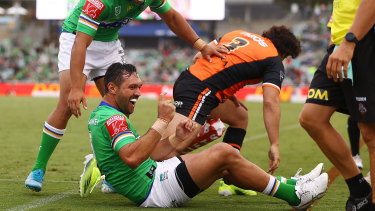 Jordan Rapana celebrates after going over for the Raiders Credit:Getty

Having set up Rapana in the first half, another Williams kick, coupled with a flick pass from Bailey Simonsson, sent Hudson Young across for their third, before Charnze Nicoll-Klokstad got in on the action after a relatively quiet game. Rapana pushed across the line once again in the 76th minute to put the cherry on the cake.

Youngster Sebastian Kris again underlined his status as one of the Raiders’ most exciting prospects. In just his fifth appearance, Kris danced over after 10 minutes into the game, believing he had secured the fourth try of his short career, but the celebrations were quickly dashed by a no-try ruling.

With his court proceedings now behind him, Curtis Scott was also impressive after a shaky 2020 season him which saw him in and out of the squad.

The Tigers had started the game well, but coach Michael Maguire would have been fuming at the state of their attack which, by the end of the game, had run out of ideas against the Raiders defence.

“It’s hard to take the loss,” Maguire said post-match. “I know the team is a lot better than what we showed in the second half. We will look at that first half, take what we need out of that and move forward.”

New Tigers captain James Tamou was forced off the field in the 24th minute after being the victim of friendly fire, catching Joey Leilua’s shoulder square on the chin. Tamou was gone for the remainder of the first half but made a return for the second period after passing HIA protocols.

Luke Brooks was shaky early on, but was able to find Liddle with an accurate kick for the game’s first try. James Roberts made a series of errors in the first half but was able to redeem his performance in the final ten minutes, producing a magic flick pass to send David Nofoaluma across the line.

Maguire was also singing the praises of Daine Laurie post-match in his first hit-out with the club after multiple try saves in the first half.