The Western Bulldogs have posted their 13th victory of the season, holding a doughty Gold Coast Suns at bay by 11 points to maintain a top-two position on the ladder. And in between, in his second game, Jamarra Ugle-Hagan announced himself.

For those who have been waiting (and waiting) for the No.1 draft pick to show what he can do at senior level, it was worth it. In his second game, he kicked three wonderful goals, showcasing an impeccable technique, marking and moving beautifully. 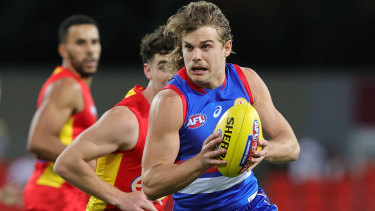 Otherwise, the Dogs won by weight of class and numbers. Marcus Bontempelli burnished his Brownlow Medal credentials with 36 possessions, Bailey Dale was brilliant off half-back with 30, and Bailey Smith replaced Tom Liberatore in the centre square with aplomb.

The Suns, though, were far from disgraced, maintaining their form of the past three weeks. Yet again, Touk Miller led the way with 38 possessions, while Jeremy Sharp gathered 30 in his fifth game. Inaccuracy, lack of composure at critical moments, and bad luck cost them. 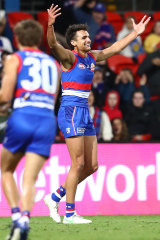 They shot out of the gates to jump the Dogs early, with Miller finding Ben Ainsworth for the first goal of the game, and then Nick Holman getting his first of three for the quarter, on the end of a clever chain of possession from half-back.

Lachlan McNeil jump-started the visitors with a free kick, before Ugle-Hagan inserted himself with his first, and the endlessly-creative and clever Caleb Daniel brought them within five points with a second on the clock.

Then the ‘Bont’ show began. His second quarter was imperious, not just statistically (14 possessions, five clearances and four entries into attack) but how he commanded the tempo of the play and shrugged off tackles with, well, a shrug.

His efforts drove the Dogs to a five-goal quarter, with Daniel and Jack Macrae also doing damage, and Bailey Smith and Lachie Hunter gathering possessions at will. But the Suns didn’t fold, using the ball with efficiency when they got their hands on it, and keeping the margin to 11 points.

And they hung in there, going goal for goal with the Dogs but unable to bridge the gap, with Rory Atkins incredibly unlucky to be denied a goal on review, only to see Cody Weightman draw a free at the other end for the visitors to break 16 points clear at the final change.

In between, Ugle-Hagan kicked his third goal: juggling a contested mark, then heaving a high ball through from a sharp angle. He’s clearly a work in progress, but looked as natural a footballer as you could wish to see, and hopefully will delight fans for years to come.