The Tigers have eased the pressure on embattled coach Michael Maguire and kept their finals hopes alive with a spirited 42-24 comeback win against the Broncos at Suncorp Stadium.

Maguire’s men trailed 18-10 at the half-time break after a dreadful start to the match but found their attacking spark through Adam Doueihi and Daine Laurie to score six second-half tries.

Doubles to David Nofoaluma – who has now scored more tries (86) than any other player in Wests Tigers history – and Tommy Talau will steal the headlines but it was the work of Doueihi and Laurie that steered the ship.

The pair are forming a formidable combination for a Tigers team which has lacked any continuity in key positions under Maguire.

While it was eventually a comfortable win for the joint venture outfit, the start to the game was anything but. There were three coach-killers in the first 10 minutes.

Ken Maumalo was responsible for two of the plays which must have enraged Maguire.

First, the mid-season recruit allowed a wayward Luke Brooks pass to roll into touch when he could have easily dived on the loose ball.

A few sets later, Maumalo knocked the ball on at the start of a fresh set deep inside the Tigers’ half.

From the ensuing scrum, the Tigers were penalised for throwing the ball away as the shot clock expired. So Brisbane took the two points on offer. Trailing 8-0, another awful loss beckoned.

It was mind-numbing to watch from a neutral perspective. It must have been much more painful for Maguire.

Thankfully for the coach and the Tigers faithful, the rest of the match was easier to digest. 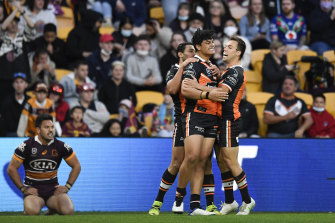 The Tigers were staring down the barrel of another embarrassing loss but bounced back to take the points at Suncorp.Credit:Getty

Doueihi sparked the attack with some sharp playmaking to put Luciano Leilua over.

But tries to Jordan Riki and Thomas Flegler – who was the beneficiary of a brilliant Payne Haas play – still sent the Tigers into the break trailing 18-10.

The two teams traded tries early in the second half. There were three lead changes in the space of 14 minutes.

But when Doueihi grubbered into the Broncos’ in-goal in the 69th minute and three separate Broncos managed to miss the chance to either ground the ball or bat it dead before Nofoaluma cleaned up the crumbs, all the early pain faded away.

Maumalo made up for of his earlier errors soon after, when he soared above Jamayne Isaako to claim a kick and offloaded to Junior Pauga.

As Pauga slid over for his first NRL try, the pressure on Maguire eased ever so slightly. The congested nature of the race for eighth spot leaves the Tigers just one win from the last spot in the finals, despite currently sitting in 12th place.Sports news, results and expert commentary. Sign up for our Sport newsletter.