Twelve years ago, on a suburban footy field in Auckland, Nathan Cleary played his first game of rugby league.

It was almost his last. 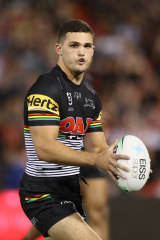 Nathan Cleary and his magical wand otherwise known as the football.Credit:Getty

If Nathan had been playing in the western suburbs of Sydney, one of the great careers – which has started to blossom at Penrith in the past three years – might never have happened.

Instead, because of the weight divisions entrenched in junior rugby league in New Zealand, his young career took off.

“The next year, I played in the restricted weight division,” Nathan says. “You were still up against big kids, but you were playing more footy to win games instead of just giving it to the biggest player on the field.”

Ivan doesn’t underestimate the importance of that system for his son’s career.

“If there was no restricted-weight footy, I don’t think Nat would’ve played in New Zealand, which means he wouldn’t have played until he got to Penrith,” he says. “I’m not saying he wouldn’t have made it in the NRL, but it would’ve severely restricted his development as a half. I like telling this story to as many people as I can in Australia because I really liked the concept.”

It’s a story worth telling as the production line of halves starts to dry up at the top level, although a weight disparity at junior level is only part of the story.

How can Sharks veteran Chad Townsend, 30, command a three-year deal worth $2.4 million with the Cowboys?

How can Broncos rookie Tom Dearden, 20, go from being the “next Allan Langer” with a devastating running game to being so unwanted by his club that it doesn’t table an offer?

How does Roosters sensation Sam Walker, 18, with his vision and long spiral passes, become the exception and not the norm of young halves rising through the ranks? 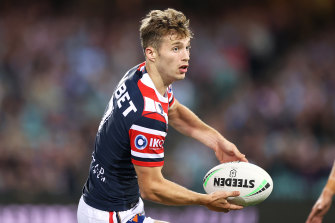 Rising star Sam Walker has been the exception to the rule in terms of emerging playmakers.Credit:Getty

Why does the modern-day half play in a straitjacket, limited to one side of the field instead of playing – dare we say it – “eyes up footy”?

Ivan Cleary agrees. “As long as I’ve been coaching, which is about 15 years now, there’s always been a shortage,” he says. “But with the new rules, the gulf between the best and the rest has become really obvious.”

How did it come to this? And how does rugby league ensure the next Nathan Cleary isn’t lost to another code?

For best part of 30 years, at the Dragons, Storm and now the Roosters, Tony Barnes has nurtured generations of superstars, from Mark Gasnier to the Morris twins to Boyd Cordner to Latrell Mitchell.

But he’s worked with just a sprinkling of halves who have made it through to the NRL, most notably two-time premiership winner James Maloney.

“The biggest reason we don’t get many good halves is because it’s all about size,” says Barnes, who has been the Roosters under-20s coach for the past six years. “It’s about loading up the big fellas and rolling through the opposition. That’s the game, that’s what the coaches coach, and there’s no footy in them apart from the occasional back-line play.

“They don’t teach halves to play short, to play through the ruck, to work on decision-making. All these things get clouded if you have kids twice your size running at you. It’s about who can bash and barge over the line.”

There has been debate about weight divisions in junior football for years.

Many claim the disparity is because of the popularity of the game among young Pasifika players, something that Samoan, Dr David Lakisa, addressed in his recently completed PhD on Pacific Sport and Diversity Management.

A former development officer at the NSWRL, Lakisa writes: “This is a complex issue: on the one hand, non-Pasifika parents might be criticised for overreacting to the athleticism of Pasifika youth who are the same age as their children; on the other hand, researchers have argued that Pasifika adolescents typically have larger physiques and hold vastly different attitudes and ideals towards body image than their Caucasian counterparts.”

Interestingly, the NSWRL says there hasn’t been an overwhelming desire from parents to bring in weight restrictions. Some parents have expressed concerns about fat-shaming at weigh-ins while others believe it will prevent larger kids from playing. 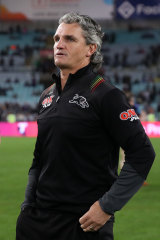 Ivan Cleary on his time at the Tigers: “I told him [Luke Brooks] to run the ball because that’s his strength. I’m not sure what he’s doing now.”Credit:Getty

The price of ambition

A couple of years ago, Ivan Cleary watched a junior team’s training session from afar.

For half an hour, he saw a coach put his side through a gruelling opposed session, with spilt halves standing on the left and right of the ruck, running plays that had been clearly cut-and-pasted from an NRL team.

The players were 12 years old.

“I’m passionate about this issue,” he says. “Rugby league coaching at a junior level has becomes so NRL-like it’s ridiculous. I was once at an under-8s game and this kid was a natural offloader of the ball but his coach was on the sideline screaming out, ‘Don’t pass the ball!’

“Rugby league is a game, unlike other games, that you can win purely by size and strength. At junior level, you don’t have to be skilful. And many of these coaches just want to win. My younger son [Jett] is 16. He learnt more playing union and OzTag because he could roam around the field.”

So it’s not just about size but coaching ambition.

Leading player agent Sam Ayoub has had some of the best halves in the game’s history on his books, most notably Johnathan Thurston.

He reckons the issue is a NSW problem because NRL clubs have too much influence on junior teams.

“They’re coaching the daylights out of their players here in NSW, whereas in Queensland they’re not in a structured NRL system,” Ayoub says. “I can tell you because I see it all the time. I could pick three young halves in Cairns, in Townsville, in Mackay who haven’t come through those systems who are standouts because they just play football, as they should.”

Barnes does his best to buck that trend. For example, in trial matches he’ll prevent players from running block plays.

“You do things out of the ordinary to teach them things,” he says. “I’m a skills coach, not a wrestle coach. That’s what I believe in. I leave that to someone else because my heart’s not in it. I’m about gripping the ball properly, passing the ball properly.”

Former Penrith general manager Phil Gould identified these issues more than a decade ago when he established a halves academy, although it no longer exists.

He brought in Trent Barrett to run some sessions. Among the first teenagers through the door were Nathan Cleary and Jarome Luai, the current halves for the Panthers.

The halfback is born. The only one out of the box has been Cooper Cronk.

“The halfback is born,” Barrett says. “The only one out of the box has been Cooper Cronk. As soon as I saw [Warriors rookie] Reece Walsh touch the ball the other night I thought, ‘Here we go’. He moves like a six. So does Kalyn Ponga. Dylan Brown is another. They don’t have to think – they’re born halves. You’re just hoping these types of players get a coach at a young age who can nurture their skill, their left to right pass, their kick.”

All of them could play either seven or six, centre, lock or hooker. In the modern era, many players are less skilful.

That has been the line coming out of the Broncos for the past fortnight after one of their brightest young prospects signed with the Cowboys for $1m.

It wildly conflicts with the intelligence coming out of junior footy only a few years ago.

“When I saw Dearden as a 16-year-old, he was playing off-the-cuff football all of the time,” former South Sydney head of football Shane Richardson says. “Everyone knew Sam Walker would be a superstar, but everyone thought the same of Tom Dearden. 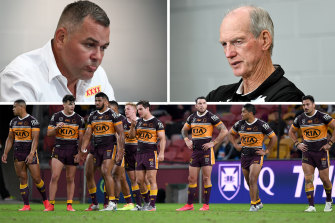 Would Tom Dearden have fared better at the Broncos if the club hadn’t punted Wayne Bennett for Anthony Seibold?Credit:NRL Photos

Elsewhere, other coaches simply turn their halves into robots.

For all the criticism levelled at Ivan Cleary for the way he left the Wests Tigers, people easily forget the form of halfback Luke Brooks on his watch when he was named Dally M Halfback of the Year in 2018.

“I told him to run the ball because that’s his strength,” Cleary says. “I’m not sure what he’s doing now.”

Mention the term “eyes up footy” to Andrew Johns and watch his eyes roll back into his head in anger.

“I hate it: eyes up footy,” he grumbles. “Your eyes should be up all the time. That term is just a cop-out from people who don’t know what they’re talking about. A proper halfback should always react to the defence.”

The upside of the quicker ruck from the new six-to-go rules has been the re-emergence of the creative half playing what is in front of him. Witness the form of Benji Marshall at the age of 36, and the emergence of Sam Walker at 18.

“The slower ruck from the wrestle meant you had to play your set plays to get around teams,” Johns says. “Now, with the quicker play-the-ball, the best halves are standing up again. The best teams with the best halves who don’t play structured football are the ones going well.”

And that’s when rugby league is at its best: when it’s unpredictable, played with flair, much like Johns and his brother Matthew at a sun-bathed Marathon Stadium on a Sunday afternoon.

“Although you’re being paid as a professional, you play your best when you’re playing like it’s a pastime,” Matthew said recently.

“We were fortunate growing up,” Nathan says. “That sort of football was encouraged. The boys I’m playing with now, we’re very grateful for the coaches we’ve had.”

Could his career have started and ended at one match for the Mt Albert Lions under-11s if not for the restricted weight divisions of New Zealand rugby league?

“I probably would’ve kept playing because I just love the game so much,” he says. “But there were other kids who just couldn’t get into the game.”