Western Bulldogs forward Jamarra Ugle-Hagan says pressure to perform as a No.1 draft pick “does get to you here and there”, but he has support from fellow pick one Paddy McCartin, who reached out to him earlier this season.

Ugle-Hagan said Swans defender McCartin – who was drafted by St Kilda with the first pick in the 2014 draft – got in touch after the Bulldogs’ win against Sydney in round three. 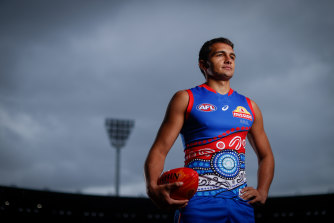 Jamarra Ugle-Hagan admits he is impatient and hopes to break into the senior Bulldogs side for Sir Doug Nicholls Round.Credit:AFL Photos

“He just looked after me, through little messages, saying he’s there for me and ‘message me if you ever need’ because it’s a challenging role to accept,” Ugle-Hagan said.

“But, it’s just great to know that someone else on another football team understands my position and understands what we go through, which is massive.”

McCartin was delisted by the Saints in 2019 and only played 37 games with the club since being drafted as a key forward with the first overall pick. He has battled long-term concussion issues and is now finding his feet for the Swans in defence.

Ugle-Hagan said McCartin was close with Bulldogs forward and former Saint Josh Bruce from his time at St Kilda. Ugle-Hagan said Bruce is “pretty much my older brother at the football club”.

“I found he [McCartin] was great bloke on the field. Just so nice. Always just gave me a couple of confidence messages on the field when I was out there,” Ugle-Hagan said.

He is currently playing in the VFL for the Bulldogs after being dropped from the senior side after the team’s loss to Adelaide in round seven. The 20-year-old says being the first pick is still a “massive challenge”, although he remains proud he went first overall. 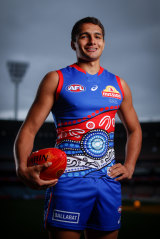 “It’s going to affect my game here and there because they come at me knowing who I am and what I do,” Ugle-Hagan said.

“[The pressure] does get to you here and there, but when you are on the footy field, you just forget everything when you are out there.”

Ahead of Sir Doug Nicholls round, Ugle-Hagan said he hopes to break into the senior Bulldogs side this weekend, admitting he was not a patient person.

“Especially when Indigenous round comes around, I want to be out there 100 per cent, running out with my mates and my brothers,” he said.

“It is hard to be patient, but my time will come and obviously, I’m only 20-years-old, so I’ve got plenty of footy left.”

Ugle-Hagan has played 11 games for the Bulldogs and came into the team late last season after fellow forward Bruce injured his knee. The key forward did not play finals last year, but played the first six games this season, kicking only four goals before being dropped.

Ugle-Hagan said he understands his current role in the senior team is to be key forward “[Aaron] Naughton’s best mate out there”, and he’s aiming to improve his consistency in competing in contests.

“My nan always tells me ‘you’re in the 20 [best players]’… but with the patience as well, that’s probably the hardest bit, to accept that I’m not there yet, but I’m coming,” Ugle-Hagan added.