AFL boss Gillon McLachlan believes there was enough consultation with key stakeholders before the league introduced a suite of controversial rule changes for the 2021 season designed to bust congestion and help free up scoring.

The league announced on Wednesday that there would be a change to the man-on-the-mark rule, that players would be given five metres more room to run before kicking out and that rotations would be slashed to 75 per quarter. 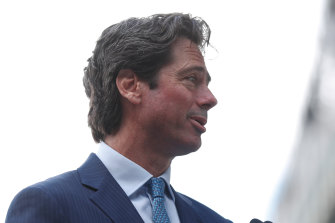 AFL chief Gillon McLachlan believes there was enough consultation on new rules before their introduction.Credit:Getty Images

On state league angst about zones he said: "We have always trialled rules in the VFL and other competitions. I understand people don't like change but I feel it's the right place to be doing that."

The challenge for AFL football boss Steven Hocking and the competition committee, McLachlan said, was knock-on effects of rule changes.

"Everyone sitting in the calm light of day wants less congestion and they're working through that in the way they think is the best way," he said.

McLachlan also said he believed the players enjoyed the condensed part of the fixture in 2020, and there was an appetite for it again from clubs.

No decision has been made for the timing of next year's grand final either, he said, leaving the door open for another night affair.

He said it would be highly unlikely 2020 would have 16-minute quarters and that the league is not planning or forecasting for hubs in 2021, although there are contingencies for that if need be.

McLachlan said the fixture could be released later than usual to give more certainty in a fast changing landscape.

The Age reported this could be as late as February.

"Our plan and our start date will be 18 March next year, 22-round season," McLachlan said.

"We look into 2021 knowing COVID will still be around. We are going to have to work through it to an extent. How pervasive it is and what the impacts are we don't know.

"The later we can release the fixture the more certainty we can give our clubs, our players and our supporters."

McLachlan said the AFLW season was similarly fluid but a fixture would need to be released in early December so players can make work plans before the early February start. 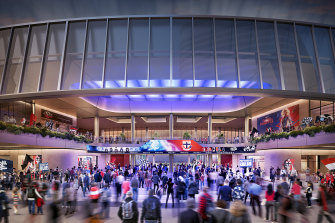 Marvel Stadium and the Docklands precinct will have a $225 million upgrade.

Meanwhile, the AFL has released plans for a $225 million Marvel Stadium revamp in conjunction with the state government.

"When construction starts we will be able to commence with the games ongoing," he said. "The seating bowl will be largely unaffected."