One of the pleasures of living in a non-football state is introducing new people to our wonderful game. It is a foreign concept in Melbourne but in Sydney, the vast majority of the population are blissfully unaware of the greatest game on earth.

My wife took a friend, Liz, who fitted this category to the Swans-Giants elimination final at the SCG in 2018. I swear to you on the drive I mentioned that word was “Buddy” Franklin was sore and may not play. “Who is he?” she asked. 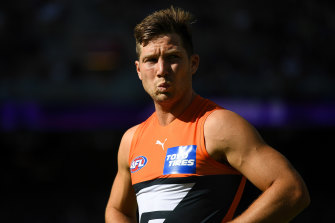 So what is Toby Greene like? It’s a complex question. And my attempt to answer that here comes with a rider. I’m a huge fan of him as a player and person so I’ll put upfront my positive bias.

In short, though, he’s a private school boy with a twinkle in his eye. A person of high intelligence who enjoys the competitive side of life. He studies finance but is also a fan of boxing and loves Mike Tyson.

As a player he’s a rare beast who has started as a midfielder but settled as a forward. Most players who are of midfield size want to play in the middle. My sense is this is for two reasons. One, you are always in the action and two, it’s easier. You get more room whereas as a forward you play with a permanent tagger – especially, if you are a match winner such as Toby.

What he gained in his years as a mid was an incredible work rate and a tank. His work rate is underrated unless you watch him closely. When he takes a mark running back to goal, what the television has missed is his running from one side of the ground to the other. 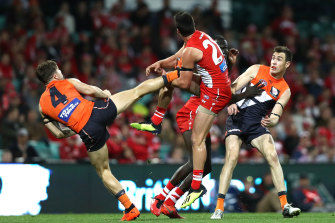 But the standout traits are his competitiveness and contagious want to win.

The 2019 final series had more drama than the entire catalogue of Netflix and the central figure was Toby. This period more than any other highlighted the theme of Toby’s career, being loved internally and criticised by those outside the club.

Leading into the first final against the Western Bulldogs, coach Leon Cameron was delivered the perfect motivational recipe and he played it magnificently. It was the Bulldogs, a great rival, and their skipper and best player Marcus Bontempelli had broken the larynx of Nick Haynes, the very popular Giants interceptor in a round-22 match just weeks earlier. Adding to the script, due to the timing of the medical report, he was given a fine rather than a suspension and was free to play.

It would be an understatement to say Leon had the team in a sharp frame of mind upon entering the stadium. And guess who wanted to show the coach and his teammates how much he cared? Toby.

He ended up at the AFL Tribunal on a misconduct charge after a clash with Bontempelli in the first quarter of the elimination final. He was fined after he admitted at the tribunal that it wasn’t a great look grabbing the Bulldogs skipper’s hair, but consider how this admittedly unsightly act appeared to Haynes, who sees a teammate prepared to get himself suspended to stick up for him and his team. No amount of words can gain that respect like that inside the walls of a football club.

Outside the walls of the club, the view is different of course. Thus the view of Toby invariably depends on where you sit, inside his tent or out.

That tribunal hearing will always sit against the backdrop to the passing of Danny Frawley that afternoon. Toby was Spud’s kinda bloke.

In the second quarter Brisbane Lions star Lachie Neale was caught holding the ball and Toby found himself on the ground in a tangle with him. One would think in that scenario the previous week’s warnings might have been ringing loud and clear in his head. But Toby is a warrior, a competitor and wants to win as much as any player I’ve seen. What he was accused of doing – gouging at the eyes of Neale – he didn’t do. But did a couple of Toby’s knuckles collide with Lachie’s nose? I think there’s a fair chance that occurred. To what extent this affected Neale’s game will never be known but he had a season-low 17 possessions in a game the Giants won by five points.

Toby had 30 possessions and kicked two goals that night and was best player on the ground. He was also suspended for one game that week at the tribunal and missed the preliminary final.

When you are dealing with these types of incidents you need the player to be self-aware and to tell you the truth, which allows you to establish a way forward. Not once did Toby not tell us the truth. Or if there was a little white lie, the diverted gaze accompanied with the trademark grin told you what you needed to know anyway.

Like most clubs, the Giants have formed connections by displaying vulnerability. The stories players and staff share about what has made them who they are, leave lasting impressions. It would be unfair to rank stories because that’s not the objective, however the feeling in the room when Toby opened himself up to the group was palpable.

And any boy that loves and supports their mother the way Toby does endears themselves to those around them.

Over the years, the Giants have worn criticism for being overly protective of Toby, but having heard his story they will do everything they can to look after him.

When Toby leads his team onto the MCG on Saturday as captain, those behind him will love the fact that he’s their leader.