The COVID-19 outbreak in Brisbane has thrown the AFL season into chaos as they make decisions at a rapid rate to keep the season flowing as normal.

The league is better prepared this time, with a colour-coding process – red, amber and green – being used to assess risk and make decisions on where clubs should be located, and players and staff are used to pivoting. But the AFL is also under no illusion as to the strain such decisions have on people. 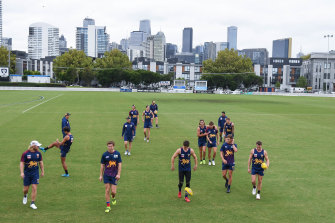 The Lions train at Port Melbourne on Monday.Credit:Joe Armao

To that end it is looking to make as few unnecessary changes as possible, keeping the fixture fluid but not making change for changes sake.

At this stage they have set the men’s fixture until round six and are still a few weeks from revealing the locations of games for round seven and beyond.

What happened to the Brisbane Lions on the weekend?

Late on Friday, just before the Lions played Geelong at GMHBA Stadium, the Victorian government said that anyone in Victoria who had been in Brisbane or the City of Moreton since March 12 was required to self-isolate and get tested because of a positive COVID-19 case in Queensland.

The government gave the Lions an exemption from that ruling to allow the match to go ahead, assessing the risk that one of the players was carrying COVID-19 as relatively low. But after the game players, staff and officials had to remain in their Geelong hotel and await further instruction. 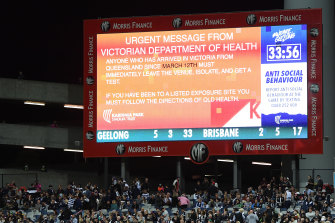 An “urgent health warning” was shown on the screen during the round two match between the Cats and the Lions.Credit:Getty

On Saturday, the Lions were tested and relocated to Melbourne as the AFL held off on sending them back to Brisbane until Sunday. Then, on Sunday, as they sat on their bus ready to travel to the airport, their CEO Greg Swann was left with the unenviable task of telling the players that the AFL had told them to stay in Melbourne.

It proved a smart decision as the Queensland government put Brisbane into a three-day lockdown on Monday.

What happened after Brisbane went into lockdown?

The AFL officially switched Thursday’s scheduled match between Brisbane and Collingwood from the Gabba to Marvel Stadium, where the two teams had been scheduled to play in round 22. The Magpies were told of the decision as they came off the training track on Monday.

Collingwood will now travel to Brisbane to play at the Gabba in round 22, with the AFL also reluctant to fly the Magpies in and out of Brisbane on Thursday, conscious they are due to play the Eagles in Perth in round five. 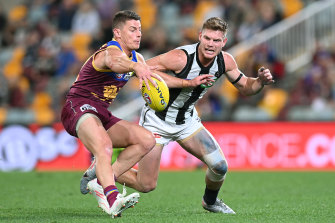 The Lions’ clash with the Pies was originally scheduled for the Gabba on Thursday night.Credit:Getty Images

The AFL then instructed the Gold Coast to travel to Adelaide on Tuesday morning so they weren’t caught inside Queensland if the lockdown was extended to other parts of the state.

The Sydney Swans, who had played at the Gabba on March 20, were told to isolate and get tested by the NSW government, meaning they had to reshuffle their training schedule, though they have now been granted an exemption to train. Assuming no one from their party tests positive to COVID-19 they expect to travel to Melbourne on the weekend to play Richmond at the MCG.

How are the Lions affected?

Players and officials had to buy some clothes as they are likely to remain in Melbourne for a few weeks, depending on what happens in Brisbane. They play Thursday night against Collingwood and then in Ballarat against the Western Bulldogs the following Saturday.

The club was allowed to fly down four players – Connor Ballenden, Rhys Mathieson, Darcy Gardiner and Marcus Adams – to Victoria to join the squad who trained at Port Melbourne on Monday.

They have also lost their biggest fixture of the season. The Easter Thursday match against Collingwood is the club’s biggest revenue earner, a game they have now not played for two consecutive seasons because of COVID-19.

Are other clubs affected?

At the moment the Gold Coast has hit the road, uncertain exactly when they will return home although they remain hopeful they will be able to play Carlton at home in round four.

The Swans have merely had a hiccup but should be able to adapt.

Collingwood get to stay in Victoria but will now have an away game against a potential finalist two weeks out from the end of the season. Two players, Brodie Grundy and Jordan De Goey, did not train on Monday due to “sniffles” but they passed their COVID-19 test and will be fine to play on Thursday.

What affect will there be on the AFLW finals?

This weekend remains unaffected as the Lions’ women’s team finished second, automatically qualifying for a home preliminary final to be played next week. The AFLW uses a top six system for finals: teams that finish top-two earn a week off, while teams three to six play qualifying finals in week one. 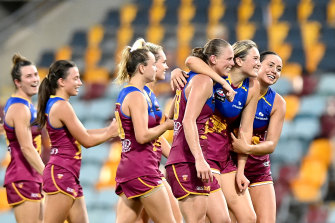 Brisbane earnt a home final and a week off.Credit:Getty Images

It is a waiting game for the AFL to see what happens in Brisbane. Ideally they would like the Lions to have the home final they have earnt. The team already had to travel back and forth to Victoria on the same day earlier in the season after a different COVID-19 outbreak in Brisbane.

Will hubs be back?

Uncertainty is the only certainty in 2021. But the AFL wants to avoid hubs, not least because of the expense of putting people up in hotels, but also because of the cumulative effect on players, coaches and their families of being away for extended periods of time.

The league had already forecast the prospect that some clubs may have to remain on the road for weeks on end rather than completely relocating and Brisbane – who managed to remain at home throughout 2020 – are the first club to experience that reality.