It’s been seven years since the Waratahs won their maiden Super Rugby title and not one player remains from that memorable evening at ANZ Stadium.

The team narrowly missed the top three last year, meaning they have not played finals football in four of the past five years. 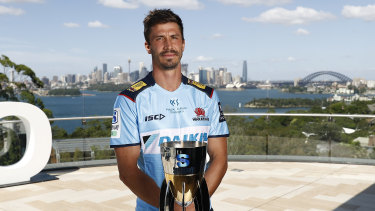 Just days out from the season opener, the Herald has addressed the burning questions facing the Waratahs, with the assistance of former Wallabies and NSW centre Morgan Turinui, now working for Stan Sport and Nine as an analyst.

There was an exodus of Wallabies from the Waratahs in 2019, and another in 2020. Are NSW dangerously low on experience in 2021?

Running through the surnames of departed Waratahs in the past two years is alarming; Kepu, Latu, Foley, Ashley-Cooper, Folau, Beale, Phipps, Hanigan, Robertson, Hunt, Simmons, Hooper. No matter how you spin it, that’s some serious firepower the Waratahs would have loved to have in their roster for 2021. A high turnover of players can force youngsters to be blooded before they’re ready but the positive for NSW is the number of debutants last year was high, meaning they’re a shade or two of lighter green.

Turinui points out the Waratahs have one of the youngest rosters and in turn, a seriously inexperienced outfit, particularly if they sustain a few injuries.

“The Tahs are inexperienced, especially in the forwards which just makes it harder,” Turinui said. “They’re probably two years behind where the Reds are. They had a young, inexperienced squad and they went for stability. Their supporters needed patience. I think the Tahs in the evolution of their list are a couple of years behind.”

How big a hole will Michael Hooper leave?

After 152 games for the club, Hooper leaves a gaping hole as he takes up a sabbatical opportunity in Japan. His intensity and work rate remains second to none but there is a leadership vacuum at the Waratahs. There are question marks, too, around the No.7 jersey.

“It’s a double-edged sword because Hooper has been such a dominant personality and figure,” Turinui said. “You cannot replace a Michael Hooper. When you look at (openside flankers) Charlie Gamble or a Carlo Tizzano, we get to see what the standard of Shute Shield is like in preparing these guys for the rigours of Super Rugby. Super Rugby AU is somewhat a softer jump you could say, so it’s a great opportunity. 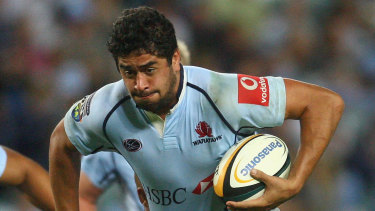 Morgan Turinui playing for the Waratahs in 2007.Credit:Getty

“Australian rugby has been great at producing No.7s and we’ve seen No.7s stuck behind other players. Yes, we’re going to miss the talismanic leadership of Michael Hooper, but if you go straight sevens, you’re looking at Gamble versus Tizzano to grab that jersey. I’d have thought Jack Dempsey is more effective with the eight jersey on.”

What sort of team will coach Rob Penney field in 2021, and how will they play?

Turinui believes the Waratahs will play with attacking intent and be far clearer in their game plan in year two under a new coaching group.

“I thought we saw exponential improvement after most games throughout Super Rugby AU last year,” Turinui said. “You could see they just didn’t know what they were doing. Some players were under fatigue and pressure and reverted back to how the Tahs were playing previously under Daryl Gibson. They were still learning how Chris Whitaker and Rob Penney wanted them to play. All their experience and Test caps have been ripped out over the last few years. I reckon they’ll play with attacking intent. Let’s make no bones about it, their set-piece is going to be crucial.”

Does Penney have the confidence of the players and management after the team were one of two teams to miss the Super Rugby AU finals last year? Could there be a change of coach mid-year?

The big talking point over the off-season has been around Penney after former prop Tom Robertson sparked discussion that there were off-field issues at the organisation. The Waratahs registered five wins from 14 matches in 2020. The Waratahs board have kept faith in Penney – in his second year of a three-year contract – and his assistants in the hope their seeds can grow. In a recent interview with the Herald, an optimistic Penney talked about wanting to “hang on” this year but one gets the impression if results don’t come, he’ll be in the firing line. 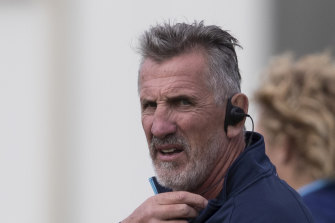 Turinui said fans needed to be objective enough to see the Waratahs need time and patience.

“He’s a NSW Waratahs coach, they’re always under pressure … that’s the nature of the beast,” Turinui said. “If he was at a Super team that wasn’t in Sydney or Brisbane, these rumblings probably wouldn’t exist. Let’s not forget what he’s inherited. Truthfully, [it was] a really poorly crafted list of players, a lack of a succession plan. Where the fault lies, who knows. [Former chief executive] Andrew Hore, [former coach] Daryl Gibson, or [outgoing general manager of rugby] Tim Rapp? How much influence they had, we don’t know.

“I think this coaching staff deserve patience and time. There was a stringent review done in the off-season regarding some former players and input from everyone. You would have thought if there was issues and you’re going to cut the chord, that’s when you do it. I’d be surprised if he was moved on mid-season. It looks like the board and players have decided that Rob is the guy to lead them forward. It’s pick and stick time at some stage.

“What you don’t want is rumblings in the season. What I am impressed by is the group of assistant coaches he has. There’s bias with Chris Whitaker, but you couldn’t find a better person. You add his rugby IP, his experience coaching teams with smaller budgets and teams he’s had to develop, he will be invaluable in this iteration of the Waratahs. Matty Cockbain is excellent too.”

Who are the go-to men for the Waratahs? Who will they look to lead them to victory?

New skipper Jake Gordon and No.10 Will Harrison will be hugely influential in the halves and with productive seasons, could push for Wallabies honours.

“We see Harrison’s great X-factor and talent on show, but what we need is a more polished, calmer performance and hopefully his captain can assist in that,” Turinui said. “Angus Bell is a year older, Harry Johnson-Holmes has another year of development and the No.2 jersey that feels slightly up for grabs. The tight-five will also be important. We know the Tahs back line will have points in them. Excited to see guys like [Izaia] Perese and James Ramm given opportunity in time and space.” 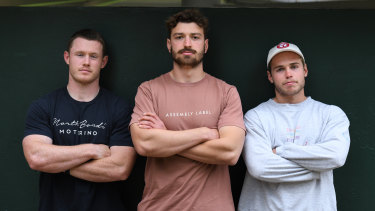 What are the weaknesses of the Waratahs game?

The Waratahs have lost all of their locks from last season, with Rob Simmons and Ned Hanigan leaving a major hole. The team now has Sam Wykes, Max Douglas, Jeremy Williams, Jack Whetton and Sam Caird on the books. The backs can be as flash as they like but without a solid set-piece and forwards getting over the advantage line, it won’t mean anything.

“Right across the board, depth is an issue for them,” Turinui said. “They’re not settled, which is normal for a young list. I would have thought they’d need to be very lucky with injuries too.

“When you talk about experience, cohesion, combinations, lineout, maul and scrum time, they’re starting from nothing. It’s a huge learning curve. If Gordon goes down, you’ve got Jack Grant and Teddy Wilson and Henry Robertson. Suddenly one is your starting nine and one’s your back-up nine.”

How important will it be for NSW to aim up in 2021 given the new broadcasting deal with Nine and Stan Sport?

Poor results in recent years have contributed to mediocre Waratahs crowds and bad television ratings. Nine – the owner of this masthead – and Stan Sport will be desperate for the Waratahs to go well during the first stages of a new broadcast cycle given the all-important Sydney market.

“You can rely on the Reds and Brumbies to be good this year,” Turinui said. “But Sydney is the prime time market where a lot of commercial dollars are. It’s really important for the Tahs to do well because you flick the TV on a Friday night and if you’re a Sydney viewer, you can watch it on free-to-air.”

Can the Waratahs beat the Reds next Friday?

A 45-33 trial victory will boost morale at NSW but a number of the Reds’ best players didn’t take part and stayed in Brisbane. Turinui raises the point that some big names in Queensland camp could be underdone heading into round one at Suncorp Stadium, perhaps similarly like the All Blacks were when Australia took them by surprise in the first Bledisloe outing in Wellington.

Make no mistake, however, the Waratahs are serious underdogs.

“You look at the Reds’ best players, they’re going in significantly underdone,” Turinui said. “Traditionally a Wallaby player would miss the first trial, play 40 minutes in the second, play 60 to 80 in the third trial. This isn’t happening. It’ll be a test of form versus class. It’ll be interesting to see whether Brad Thorn picks them. Does he start them or get them off early? It’ll be clearer once we see who is picked. The Waratahs are a definite chance, without forgetting the Reds should be deserved favourites for the comp with the Brumbies.”