Essendon have opted to rest Joe Daniher for Sunday's must-win clash against Geelong while Hawthorn have wasted no time at selection responding to a shock loss to Adelaide.

Despite Bombers coach John Worsfold declaring on Friday that Daniher was a "big chance" to play his third-straight match back after a prolonged battle with a sore groin, the star forward will join midfielder Andrew McGrath on the sidelines for the clash at the Gabba.

Daniher booted three goals upon his return against the Hawks but was goalless against the West Coast Eagles. In a compressed season, the Bombers did not want to risk him in what would have been his third match in 11 days. 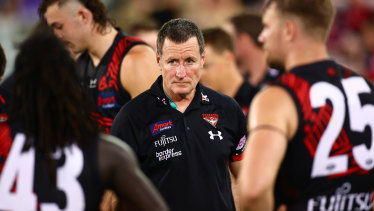 Bombers coach John Worsfold said Joe Daniher was a “big chance” to play round 16 but has rested him instead.Credit:Getty Images

"The biggest part of the decision to manage him this week was the fact that it's a real unknown how he'll go with three games in really short succession," Worsfold said.

The Bombers, in 11th spot, are two games outside the top eight and face a major battle to return to the finals.

Mason Redman and Jacob Townsend return to the side, for McGrath is unlikely to play again this season unless the Bombers make the finals because of a syndesmosis injury.

A dire season has prompted the Hawks to look to the future, a plan reinforced after the loss to bottom-placed Adelaide. They have made seven changes to the side beaten by the Crows as they prepare to face St Kilda at Metricon Stadium.

The Hawks, in 16th spot, have recalled Sam Frost, Will Day, Josh Morris, Liam Shiels and Harry Morrison. Dylan Moore will play his first game of the season, while Damon Greaves will debut. The young backman was taken with pick No.13 in the 2018 rookie draft, and has since impressed at Box Hill and in scratch matches.

"My kicking skills and my running capabilities are my strengths, as well as my one-on-one defending. [Hopefully, I can] provide the drive off half-back," Greaves said.

Skipper Ben Stratton and Jarman Impey are injured, while Ben McEvoy, Shaun Burgoyne and Ollie Hanrahan have been managed. Conor Glass and Darren Minchington were axed.

The Bulldogs, fighting to remain in the hunt for the finals, have made three changes for their night clash against the West Coast Eagles at Metricon Stadium. Zaine Cordy, Sam Lloyd and Roarke Smith return, while Easton Wood (hamstring) and Laitham Vandermeer (hamstring) are hurt. Tory Dickson was dropped.

The Eagles, seeking a top four berth, have recalled Josh Kennedy (concussion) but will be without Luke Shuey (hamstring) and Shannon Hurn (managed).