Sydney have squandered a golden opportunity to move into the AFL’s top four as Hawthorn broke a five-match losing streak to spring a stunning 38-point upset on Friday night.

Lance Franklin turned it on early but it was his old team who stole the show at the SCG, as the Hawks’ manic pressure startled the Swans and gave their own fans a glimpse of the promise that awaits on the other side of this rebuild. 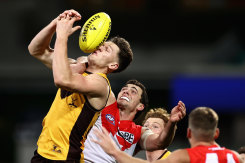 Hawthorn’s Jacob Koschitzke attempts a mark against the Swans on Friday night.Credit:Getty

For Sydney, this was an unmitigated disaster. On paper, against the second-bottom visitors, it was the sort of match they simply had to win. Victory could have lifted them above Brisbane and Port Adelaide and into fourth spot – but instead this 14.5 (89) to 7.9 (51) capitulation leaves them suddenly vulnerable ahead of a tough schedule after the bye next weekend.

Coach John Longmire will spend the break searching for answers to arguably their worst performance of the year. The Swans managed just two goals after half-time, barely giving a yelp as the Hawks gleefully ran away with the chocolates in front of 25,904 at Moore Park, having led on the scoreboard for all but a two-minute stretch in the first quarter.

The natives were restless – mostly because of a lop-sided free kick count (26 to 10 in Hawthorn’s favour) and a string of perplexing non-decisions for holding the ball and deliberate out of bounds – but the bottom line was that Sydney were outfought and outmuscled by a better team on the night.

Former Swan Tom Mitchell (34 disposals) led the way for the Hawks but it was their next generation who provided the backbone of this triumph.

Changkuoth Jiath (28 disposals) was imperious moving in both directions across half-back while the physical tone was set by debutant Jai Newcombe. Picked up by the Hawks at last week’s mid-season draft, Newcombe laid on an astonishing 14 tackles – the most ever by an AFL first-gamer.

Hawthorn’s attack at the football yielded immediate dividends as they ambushed the Swans from the outset to kick three of the first four goals.

Franklin was at the heart of Sydney’s best moments early on. He set up their opener by playing on from a mark 55 metres out, selling candy to two Hawks players and squeezing between them before spotting up a free Will Hayward to convert.

Buddy then snapped the 969th goal of his career from the pocket, and moments later, Isaac Heeney crumbed a contested marking contest involving the superstar forward to curl in a beautiful kick on the run. It put the Swans in front for the first time and at that point, they looked good value to go on with it.

The Hawks, however, responded immediately and booted six of the next seven goals – most of them in a dominant second term – to lead by a whopping 30 points. The Swans were shell-shocked.

Joel Amartey’s first goal at AFL level, a terrific long-distance raid just before half-time, helped stem the bleeding but Sydney struggled to land another glove on Hawthorn. Amartey finished with two, ending a chain of four consecutive majors from the Hawks midway through the final term, but there were few other highlights for the red and white on a sorry night.