The Swans have held their collective breath and selected Sam Reid for Saturday’s grand final against Geelong at the MCG despite lingering concerns surrounding his fitness to see out the biggest AFL event of the year.

While wingman Justin McInerney was always expected to play after rolling his ankle in last Saturday’s preliminary final against Collingwood, doubts remain about what impact Reid can make after being subbed out at half-time.

The Swans have named key forward Hayden McLean on the interchange bench as insurance, forcing out Logan McDonald in the only change from the side that held on grimly to defeat the Magpies by a point. It is the first team change the Swans have made for more than a month.

McLean has not played since round eight, when Reid began to shine as a key forward and second ruckman. The Swans also regularly played Peter Ladhams as a second ruckman during the middle of the season.

However, an off-the-ball incident coming back from a broken thumb cost Ladhams a three-match ban and robbed him of a likely grand final appearance. It was his second unnecessary suspension of the season.

Writing on the Swans’ website, Head of Physiotherapy and Medical Services Damian Raper said Reid had some tightness in his right adductor in the second quarter. 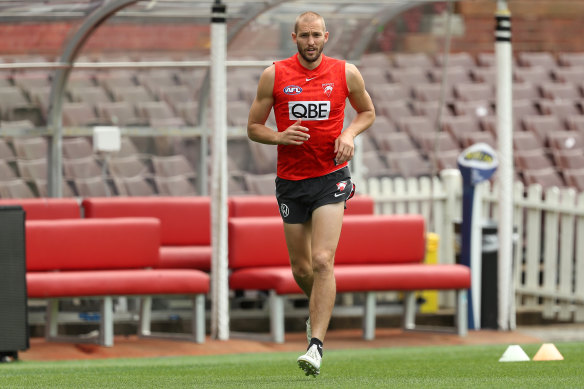 “We decided not to take any risks with him injuring it in the second half,” said Raper. “He has had some follow-up imaging this week which was encouraging, and he is progressing as expected.

“Justin McInerney rolled his ankle in the fourth quarter but received strapping on the bench and returned to finish the game off without issues.”

While McInerney joined in full training during a closed session at the SCG on Thursday morning before the team flew to Melbourne, Reid only did light running.

One of just two remaining players from the Swans’ last premiership in 2012 with co-captain Luke Parker, Reid has been in career-best form after a slow start to the season. 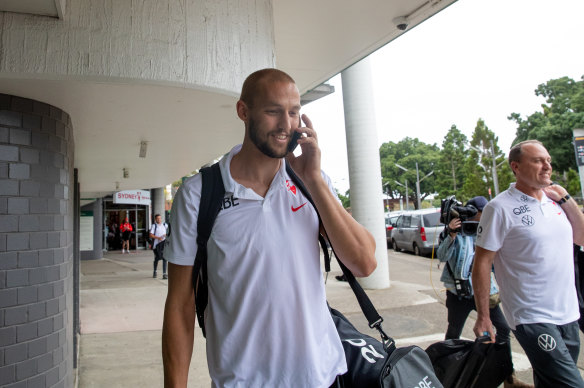 Reid leaves the SCG with the Swans team for their flight to Melbourne on Thursday afternoon.Credit:Edwina Pickles

His athleticism and natural leap for a tall player would make a fully fit Reid the ideal match-up to run with Geelong’s versatile second ruckman Mark Blicavs.

While McDonald is a tall and skilful young forward, McLean has been preferred for his bigger body, which makes him an additional ruck option to support Tom Hickey.

The Swans have been unable to settle on an extra tall forward this season, rotating McLean, Logan and Joel Amarty in that role.

“We’ve been confident all week, he was a bit sore throughout the game so we didn’t want to take any risks,” McVeigh said before Thursday’s training session.

“Obviously, you want to be flying 100 per cent, but he’s recovered really well and we’re really happy with the way he’s progressed.”

Reid, 30, is also one of a number of senior Swans, including Lance Franklin, who played in the 2014 and 2016 losing grand final sides.

“He’s played in a few grand finals before so he understands the week and the pressure that comes with it all,” McVeigh said of Reid.

The Swans have not revealed which of the three co-captains in Callum Mills, Luke Parker and Dane Rampe will lift the premiership cup should the Swans win.

As a co-captain along with Adam Goodes in the Swans’ last premiership in 2012, McVeigh was given the honour with coach John Longmire.

“Goodesy said to me, ‘I’ve won one so if we get it, it’s yours’ but I don’t think any of the captains will care if they’ve got a medal around their neck,” McVeigh said.