The Western Bulldogs need to get better at stopping the opposition from scoring heavily when they have momentum if they want to continue their push back up the ladder, according to star midfielder Adam Treloar.

The Bulldogs were impressive in their 68-point demolition of North Melbourne on Good Friday, kicking accurately for the first three quarters on their way to the win. 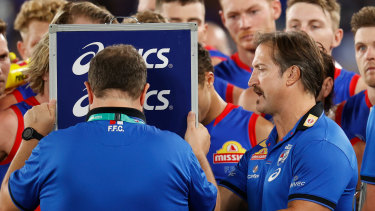 Luke Beveridge during a Western Bulldogs huddle in the match against North Melbourne on Good Friday.Credit:AFL Photos

However, they allowed the Kangaroos to kick five unanswered goals in the second quarter – repeating what has happened in three of their five games, with Melbourne and Richmond also getting run-ons that could not be stopped when they beat the Bulldogs.

It was also a feature of their grand final loss last year when the Demons kicked 12 straight goals in the third and fourth quarters before Treloar belatedly interrupted their run. 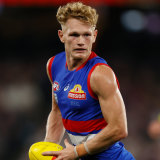 Adam Treloar in action against the Kangaroos on Good Friday.Credit:AFL Photos

“When we play, in patches, the way we want to play, we play really good footy and hard footy for the opposition to play against, but then on the flip side when we’re not going well, we’re allowing teams to easily score,” Treloar said.

The veteran said the team’s finishing touch inside 50 and their goalkicking accuracy showed improvement on Good Friday after they went to work on executing the skill under fatigue.

“It’s about mentally being able to train ourselves to steel ourselves, so when we have the opportunity to kick goals, set shots more so than anything, to follow through routine and actually kick the goal, and I think we have been moving astray from that a bit,” Treloar said.

However, Treloar said lapses around the ball needed attention, with the Kangaroos winning the clearance count 12-8 and scores from clearances by 14 points in the second quarter.

“We’ve been consistently pretty good and played good footy where we have given ourselves opportunities…but when we are having a bit of a lull during the game, we’re allowing teams to have a run on and build momentum, and you can’t afford to do that,” Treloar said.

“That comes back to contest and work rate around the ball, and that may drop off a little bit here and there.

“Naturally, opposition teams – when they get a bit of momentum and a bit of a sniff – they are hard to stop, so that is the challenge going forward.”