John Morris didn’t want to quit on the Sharks, and the Sharks don’t look like they will quit on their season. But the pledge to cheer his old team for the rest of the season means Morris might be redundant in more ways than one after a shocking week ended in the cruellest of ways for Cronulla.

The handling of Morris’ sacking earlier this week was enough to make the stomach churn of many a Sharks fan. Even then they probably weren’t as sick as Knights ace Kalyn Ponga, who was violently ill on the field several times before leading Newcastle to a desperately needed last gasp 26-22 win on Friday night. 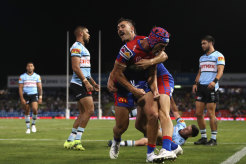 Maybe only Morris knows how he feels.

Ponga scored a miracle try with three minutes left to condemn a brave Sharks to a shocking end to a shocking week, denying caretaker coach Josh Hannay a morale-boosting win.

Whatever they argue, it’s going to take a minor miracle for a Sharks side whose coach was shown the exit after five rounds to make the finals for a seventh straight year. That drama now settled – Roosters assistant Craig Fitzgibbon has signed a three-year deal from 2022 – now they’ll worry about their cast of off-contract players.

But winning games will be more problematic, particularly if they run into more solo specials like the one Ponga produced at McDonald Jones Stadium.

In just his second match back from shoulder surgery, the State of Origin star spent most of the night vomiting on all corners of his home ground due to a virus. Never has the NRL been prevented with a greater COVID risk.

But his lasting impression would be the first and last tries and two incredible passes to set up four-pointers for Mitchell Barnett and the outstanding Brodie Jones, enough for the Knights to avoid a fourth straight loss before a torrid month against the competition big guns.

After a sideline conversion from Chad Townsend, one of Morris’ biggest supporters, appeared to steal an unlikely win for the Sharks, Ponga latched onto a Tyson Frizell speculator to score the winner in the dying stages. Even Morris might have been convinced to throw the remote control.

When you’re down on luck, that’s how it usually goes.

Morris’ former assistant Hannay knows all about the life of a caretaker coach. But unlike last year when he just wanted to drag the Cowboys away from the bottom of the ladder, this season he will be hoping to drag the Sharks into the finals.

He won’t have much success if they plan on repeating their first-half effort for the rest of the year.

The Knights are bruised, but not quite broken. Mitchell Pearce stalked the sideline with his arm in a sling after a pectoral tear. He had more than a few friends in suits with him. But Adam O’Brien’s side had too many guns in an entertaining first half, which the hosts led 14-6.

As much as Pearce’s absence is a blow, the return of Ponga has breathed life into the steel city.

He scored first after Blake Green booted a 40-20, threw a miracle pass for Barnett’s second and then was clattered in a collision with Toby Rudolf under a high Townsend kick, which the Knights argued should have meant ex-Knight Jesse Ramien’s try was disallowed.

Whatever Hannay said in Morris’ absence at half-time worked. The Sharks were near perfect in the second half, reeling in the deficit and finally hitting the lead when new dad Mawene Hiroti scored a controversial try to set up Townsend’s big moment.

But someone forgot to tell Ponga, who walked off the field and has probably never felt worse.

Maybe only Morris knows what he’s talking about.