Wilder has missed the chance for a world title shot, says Eddie Hearn

The Roosters might need Sonny Bill Williams earlier than expected.

There are also fears club favourite Mitchell Aubusson may have played his last game for the club after injuring his wrist. 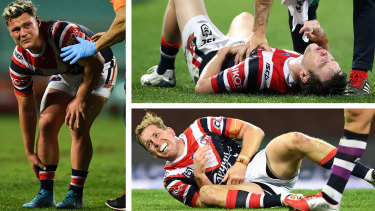 Their handling was awful and a hammering looked on the cards early, even though the visitors were without Cameron Smith and Cameron Munster.

The loss of Keary for any amount of time would be devastating given his importance to the team. He looked to clutch at his hip in the second half, but the official diagnosis was a rib injury. Drew Hutchinson and Kyle Flanagan would be the new playmakers.

"Luke's not great at the moment, he's very sore and it's pretty painful. It's something internal,'' Robinson said.

"We thought it was rib but we've worked out it's something a bit deeper than that.

Losing Aubusson would be shattering for morale given his standing at the Bondi Junction club.

Aubusson screamed out in pain late in the first half when trapped underneath Melbourne's 125kg giant Nelson Asofa-Solomona and 115kg Roosters' teammate Lindsay Collins.

A week after celebrating his 300th game for the Bondi club, Aubusson looked a shattered man as he left the field with his left arm wrapped in his jersey.

Next weekend against the Wests Tigers would have seen Aubusson draw level with Anthony Minichiello's club record 302 games.

A fractured wrist could mean a decent spell on the sidelines, and by the time off-contract Aubusson recovers, he could be competing for a forwards' spot alongside skipper Boyd Cordner (concussion), Angus Crichton (knee) and Williams.

Robinson did not want to think about whether this was it for Aubusson.

"I don't really want to think about that now; going into that could be premature,'' Robinson said.

Lam suffered an ankle injury in the first half when caught under Tino Faasuamaleaui, and only lasted a couple of minutes before he came from the field.

The injury list includes Cordner, Crichton, Jared Waerea-Haregreaves (calf), Daniel Tupou (ankle) and Brett Morris (back), while Victor Radley and Sam Verrills are out for the year with ruptured ACLs.

There will be debate about whether Robinson should rush Williams back for the Tigers.

It would be a huge call given Williams and his family only finished their 14-day isolation on Thursday evening.

It would be standing room only – at 1.5m apart – on the Leichhardt Oval hill if SBW was trotted out.

Robinson, however, played down the early, early SBW Show. Round 17 against Canberra still looks the target.

"You need about three weeks out of isolation to get going, that would be it [Canberra] – nobody get excited about next week,'' Robinson said.

"He has a big aura about him externally, but he knows a lot of the guys and he's been talking to a lot of them. It will be great to bring him in.''

Melbourne were too good as they marched to their eighth straight win – but they also picked up their share of injuries, including Jahrome Hughes (groin) and Suliasi Vunivalu who broke his jaw.

The Storm's clash with against Parramatta next Thursday night could be without Hughes, Vunivalu while Craig Bellamy confirmed skipper Smith (shoulder) was likely to need one more week's recovery, and Munster (knee) a further two to three weeks.

Hughes made the most of kicking to Roosters debutant winger Christian Tuipulotu, who did not back down against Vunivalu.