Snapshot is a weekly column taking a look at the lighter side of football.

Giants veteran Heath Shaw has been the king of the running bounce since 2009, having led the league five times for most bounces in a season between 2009-2019. He has finished second once and third for the past three years, with 2014 the closest he has been to missing the top 10 when he finished eighth on the table.

But he is in serious danger of relinquishing that title in 2020 unless he gets a move on having recorded just four running bounces for the season to sit equal 58th alongside teammates such as Zac Williams and Lachlan Ash, a pair who don't even deserve to be in the same sentence as Shaw when it comes to bounces. 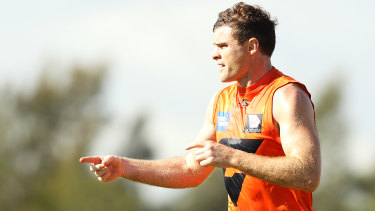 Amazingly, however, the premiership Pie is still a chance of redeeming himself with four games remaining as his miserly tally has him just 12 bounces off the leader, St Kilda's Brad Hill, and just 10 bounces off being on the podium, with Richmond's Jayden Short on 14.

Now, Snapshot knows it's a team game, and the 34-year-old has been playing as a lockdown defender, but a bounce a quarter from Shaw, with the potential of finals to come, should get him back in contention. That should be easy for a man who took 19 bounces in a game in 2009 to arrange. It's too prestigious a title to concede with such a poor finish of four bounces.

Melbourne forward Bayley Fritsch and Sydney defender Aliir Aliir can swap notes on how to set alarm clocks if the two players cross paths when the teams meet in Cairns on Thursday.

In 2017 Aliir missed a match against the Lions after sleeping through training and on Friday Fritsch suffered a similar fate when his alarm clock failed him. 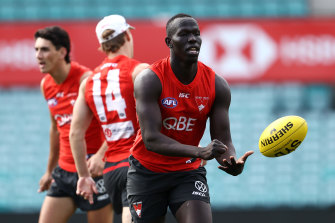 Aliir Aliir was suspended for a match after he slept through his alarm. Credit:Getty Images

It meant the 23-year-old was not on one of the team's mini-buses heading to Maroochydore Sports Complex by the appointed time of 8:45am, Friday.

Because Fritsch had been swapping between buses none of his teammates responded to his absence with an urgent text to give him a hurry up. They probably thought he was an unlikely candidate to sleep-in given he was an apprentice electrician in 2017, the year before he was drafted. As an apprentice, his day would start at 5am and end after training with Casey at 10pm, his discipline impressing the Demons, who used pick 31 to select him in the 2017 national draft.

But when he arrived to training in a car on Friday with an apology, the selectors had little option to do as others have before and leave him out of the team for the match against St Kilda.

Luckily for Fritsch, the Demons won and he's a big chance to win his spot back against the Swans.

Famous cases where the alarm clock let players down

2009
Essendon's Mark McVeigh slept-in after a big night with former teammate Dean Solomon (who was playing with Fremantle). Both were ommitted for the following match.

1981
Geelong's Garry Sidebottom missed the team bus on way to preliminary final at Waverley against Collingwood.

Racing around the world

Fresh from The Amazing Race, word has it that former Kangaroo rookie Tom Wilkinson persuaded his good mate Tyler Roos (son of Paul) to play footy again in Europe to help the Copenhagen Barracudas to victory over the Port Malmo Maulers in Sweden two Saturdays ago.

Also helping the Barracudas – who returned to the AFL competition this year – was Josh Clayton, who played two senior games with the Brisbane Lions in his three years there. Although Wilkinson was the impetus to get the pair to play he sat out the match and watched on.

The Barracudas put in a strong performance to win after crossing the bridge into Sweden to take on the Maulers, kicking more than 100 points in a high-scoring affair.