At least one NRL club will make inquiries with Israel Folau about a NRL return this season as teams prepare to raid dormant competitions for stars such as Sonny Bill Williams, Quade Cooper and All Blacks star Ardie Savea.

Sources close to Cooper have told this column that, if given the blessing of his Japanese rugby club, Kintetsu Liners, he would be willing to discuss a short-term deal with an NRL club for the rest of the season before returning to Japan for a new competition in January. 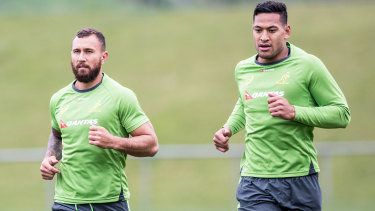 Quade Cooper and Israel Folau train together during their time with the Wallabies.

In a move that could trigger one of the game’s most high-profile signing sprees since the Super League war, momentum is gathering in NRL circles for the international recruitment raid – with luring Folau back to where it all began atop the list.

Folau, whose wife Maria is expecting the couple’s first child in August, is in limbo in the south of France waiting for Super League to resume with Catalans Dragons.

With the NRL eyeing a May 28 return – potentially with a shortened 13-week competition – at least one club is preparing an approach to the Folau camp in the coming days to gauge his appetite in signing before the June 30 deadline.

Folau, who turned 31 last week, is one of a host of players around the world who have also been earmarked as part of a raid that would generate unprecedented interest in rugby league.

While most would be welcomed into the NRL with open arms, any attempt to sign Folau would be met by resistance from head office, which remains intent on excluding Folau from its ‘‘inclusive sport’’. 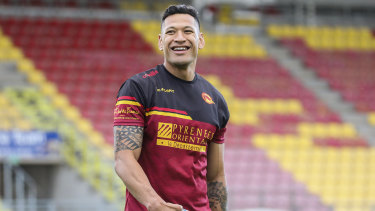 ARLC chairman Peter V’landys was careful when he was last year asked about Folau’s future in the sport. It was clear he didn’t agree with Folau’s actions.

‘‘The comments of Israel are not inclusive,’’ V’landys said. ‘‘Israel has to understand he is a role model … he has a duty. When I was at school and kids used to get bashed up because they were different, I used to go and defend them. I have no tolerance for people who put other people’s lives into violence or whatever.’’

What V’landys didn’t say was that he wouldn’t be registered. That was for legal reasons. You can be assured the governing body has done its homework and a failure to register Folau’s contract, should a club try, could force them into a legal battle they now cannot afford given the financial implications of the coronavirus pandemic. 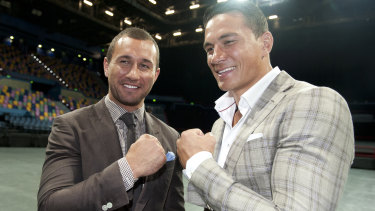 Mateship: Sonny Bill Williams and Quade Cooper are likely to become the targets of NRL teams in 2020.Credit:Harrison Saragossi

Chances are the COVID-19 restrictions may have seen Cooper play his last game for the Liners – at least for this year – and those close to the 32-year-old insist he still harbours a desire to play in the NRL.

Cooper, whose videos of unorthodox gridiron passes have gone viral, admitted as much as recently as last December in a podcast with former NRL player, Isaac John. ‘‘I want to play with Sonny before we both retire. But I wouldn’t mind playing NRL either, just for one season or even just come and do some training with the lads to see what it is like,’’ Cooper said on The Ice Project podcast. ‘‘If it doesn’t happen, it doesn’t happen. I am happy with what I have been able to achieve, but if the opportunity arose I would love to do it.

‘‘A lot of people say I would come and kill it, and I know I can play it … I look at the game and every time I watch it, I know how much I would love to play and test myself at a professional level … it’s just figuring out whether it is possible.’’ 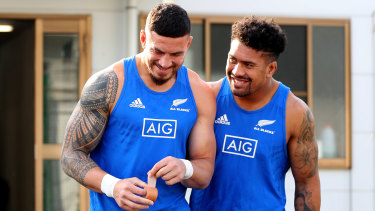 Sonny Bill Williams and Ardie Savea during their time together for the All Blacks.Credit:Getty

Cooper could fill the void at fullback for the Broncos after they lost Jack Bird for the season with an ACL injury. Or perhaps he could be used at five-eighth if Anthony Milford returned to the No.1 jersey. Former Broncos winger Jharal Yow Yeh even went to the effort of altering an image on social media with Cooper in a Broncos jersey.

Then there’s Savea, the off-contract All Black who stunned many when he too used John’s podcast to declare his desire to play in the NRL. ‘‘Strategically I would want to go to a team that was dominating, like the Storm or Roosters,’’ Savea said on John’s podcast. ‘‘One hundred per cent I want to play rugby league, I think they do a lot more in terms of off the field stuff … and also, just a new challenge. I want to test myself.

‘‘Learning a whole new game and seeing if I can dominate, or play the way I play in union, that excites me. Seeing guys like Sonny [Bill Williams] do it kind of plays on my mind a bit.’’

A lot has to happen for the stars to align, but perhaps there’s no better way for Savea to gauge if the 13-man code is his future than a short-term stint in the NRL with huge doubts over the 15-a-side code’s Super Rugby and international fixtures this year.