Brisbane coach Anthony Seibold will address his players on Wednesday morning for the final time after deciding to step down from the role.

Seibold’s management and the Broncos are working towards a termination payment that will allow them to go their separate ways. A final resolution could come as soon as Tuesday afternoon. 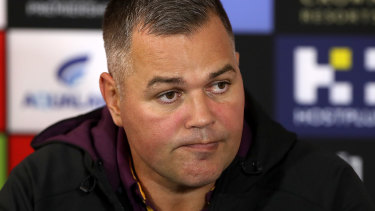 Anthony Seibold is set to officially finish up at the Broncos.Credit:Getty

It will bring to an end Seibold’s tumultuous tenure, less than two years into a five-year deal. There was an option for a sixth year in the contract in the coach’s favour.

Seibold only just emerged from a 14-day ‘COVID-19 hold’ after attending to a family matter, but will not prepare the team for Friday’s clash with the Roosters. The former South Sydney coach will front his players on Wednesday morning before leaving Red Hill for the final time.

Assistant Peter Gentle is expected to remain the caretaker coach until the end of the year. Kevin Walters and Paul Green are the favourites to take over from next season.

It has been a dramatic rise and fall for Seibold, who won the Dally M coach of the year award in his rookie season at South Sydney. However, his Broncos tenure is over after a multitude of on- and off-field dramas that could culminate in the club earning the wooden spoon for the first time.

Aside from criticism of his side’s performances, Seibold has also been the victim of vile rumours that have prompted him to explore his legal options. A European cyber-security firm has produced a report in a bid to identify where the smear campaign began.