Imagine if Wayne Bennett didn’t take the call from the Broncos or Lachlan Murdoch or whoever it was that stopped him from signing the contract that would have seen him return to St George Illawarra in 2015.

Imagine if the Dragons chief executive at the time, Peter Doust, had got his man instead of having his heart broken when Bennett called to say he’d backflipped on their handshake deal to return to the club.

Imagine if it was Bennett, not Paul McGregor, who was charged with the responsibility of digging the joint-venture out of the deep, dark hole it found itself in just three years after Bennett had left having won the premiership in 2010.

Keep those John Lennon albums in their covers, Dragons fans. Put on some Merle Haggard instead. Misery and Gin should do the trick. Bringing back Bennett would have been a disaster.

Yes, it would’ve been a sugar hit of the kind you desperately crave now. Bennett would’ve made the finals, maybe even pushed into the top four. He had a point to prove following the smouldering mess in which he left the Knights.

Eventually, though, Bennett would’ve done what Bennett always does: he would’ve packed up and left, taking the next offer on the table, and the Dragons would’ve been precisely where they are now – without a quality coach, without a plan, leaking quality young juniors. More misery and gin. 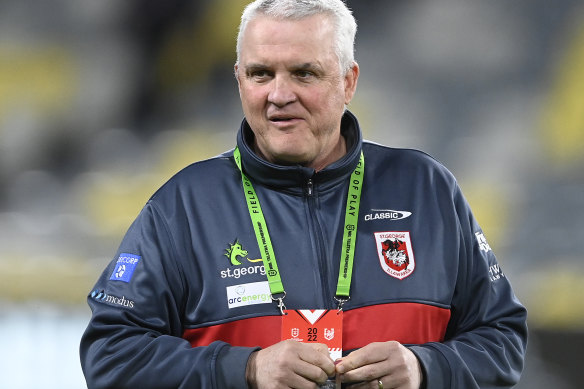 Sugar hits are no longer the answer for the Dragons. They need long-term, sustained success. Otherwise, they may as well let someone buy the club and relocate to Perth. I hear Gina Rinehart has a $15 million burning a hole in her pocket.

The first thing they must do is pay out coach Anthony Griffin, who has a year to run on his contract but will struggle to make it to the first day of summer. Put a fork in poor old Hook – he’s done.

On his watch, his side has failed to reach the finals, turned the roster into a retirement village, prompted youngsters like Tyrell Sloan and Jayden Sullivan to ask repeatedly for releases and seen players eviscerate the club’s culture on the way out the door.

Players ignored the coach’s plea to stay at home during lockdown, instead going to Paul Vaughan’s place for a barbie, and a year later ignored the tantalising prospect of free food and booze at the presentation night.

The playing group are divided into two camps: those to whom coach speaks, and those to whom he does not. You aren’t winning football comps let alone many games when things are that toxic.

Griffin was always going to be a mistake although too many people on the board listened to his cheer-squad and signed him anyway. Maybe they were too scared to not appoint him.

When this column wrote that he wasn’t the right man for the Dragons, the campaign to ensure Griffin was appointed became grubby and personal.

The narrative was spun that myself and colleague Danny Weidler had been backgrounded by Phil Gould, who fell out with Griffin when he was coaching Penrith.

I can’t speak for Weidler, but I know who my sources were and Gould wasn’t one of them. I knew from experience that ringing Gould would come with a demand not to write anything. I also learned a long time ago that Gus spins the narrative the way Gus wants to spin it.

You didn’t need to talk to Gould because you could ring anyone from Penrith for an assessment about Griffin and they would’ve told you he had lost the support of the players long before his departure.

Assistant Cameron Ciraldo, who the Dragons could have signed just a few months ago, coached Penrith for most of 2018. That’s a reality the cheer squad never wanted to admit.

The second thing that needs to happen is Craig Young must stand down following his unfathomable decision to provide a character reference on official club letterhead for Brett Finch, who is awaiting sentencing for sharing child abuse material on a gay chat line. There are air swings and then there’s not even being in the same suburb of the ball on the tee.

Young is a good man who bleeds red and white but for the sake of his club he must fall on his own sword. It won’t surprise if he eventually does.

Sacking coaches and finding new directors are the least of the Dragons’ problems, however.

Since winning the premiership, the club has become a mess, divided not in two but three. There’s St George, with its storied history but diminishing junior base. There’s WIN, the media company owned by Bruce Gordon that won’t spend a cent more than required. And there’s Illawarra, which provides 4000 of the club’s 5500 juniors and remains one of the biggest nurseries in the country.

That nursery is what prompted Ciraldo to make overtures to sign there weeks before he did the deal at the Bulldogs. Some directors were keen but, ultimately, it backed Griffin.

If Young and Griffin go, it might open the door for Dean Young to return from North Queensland. But is he ready? There’s a push from many supporters for Des Hasler. They could do worse.

From all reports, head of football Ben Haran is a quality human vested with one of the toughest jobs in the NRL, but he’s better suited to team management than being a head-kicker prepared to stand up to the coach and managers, even the board.

The Dragons desperately need a figurehead who can pull the trigger on the coach, sort out recruitment, convince Sloan and Sullivan to stay (they’re staying, for now), fire up Zac Lomax, harness the juniors and rise above the division on the board.

Dragons fans will accept that knowing they can see the promised land on the horizon. Until that time, there’s always misery and gin.