The All Blacks have secured their place on top of the Rugby Championship ladder and kept their undefeated start to the season alive with their second dominant win in as many weeks – this time against Mario Ledesma’s Pumas.

The All Blacks were ruthless in the 39-0 win, which eclipsed the 38-0 defeat of Ledesma’s side in the second of two Tests last year.

Ian Foster’s side took some time to adjust to the unpredictability of the Pumas on both sides of the ball but eventually found the rhythm that has led them to an undefeated start to the season.

“We can keep building on what we’ve achieved. But on the whole, if we just keep building, I think we’re in a good spot.”

The Pumas managed to drag the All Blacks into playing their own, unorthodox game for 27 minutes between Rieko Ioane’s early, opportune try and Sevu Reece’s five-pointer.

A rampaging Luke Jacobson storms forward for the All Blacks during their 39-point shutout of Argentina.Credit:Getty

But when Pablo Matera was shown a yellow card for killing the ball at the breakdown deep inside his half and Dalton Papalii fell over the line at the back of the rolling maul as the final play of the first 40 minutes, the 22-0 scoreline left the match feeling very similar to the Wallabies’ trio of defeats through the Bledisloe Cup series.

There were no blips in the slow, lacklustre second half as the All Blacks strangled the life out of the Pumas.

Like the Wallabies in the matches preceding this clash, Argentina weren’t terrible. But they weren’t good enough for long enough against the world’s most clinical team to repel repeated waves of pressure.

The pressure started up front. With ball in hand, this was arguably the All Blacks’ best performance of the last month. 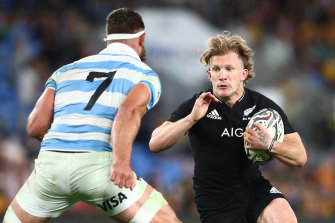 Damian McKenzie was potent with ball in hand. Credit:Getty

Every run crashed over the gain line and provided front-foot ball for Beauden Barrett and his backs.

Luke Jacobson’s try early in the second half put the result beyond all doubt.

It also showcased the incredible depth Foster has to work with.

Quick ball saw Barrett split the Argentinian line straight through the middle from about 40 metres out. After beating a few defenders through footwork and shear strength, the star playmaker threw an incredible flick pass to the young No. 8.

If Barrett wasn’t the best player on the ground, he was in the top two or three. Scarily, he isn’t even Foster’s first choice five-eighth.

The 39-point win was close to the perfect warm-up for two tournament-deciding clashes with the Springboks, which will begin in a fortnight.

The depth at Foster’s disposal has allowed him to leave superstar players at home to be with their pregnant partners, and he now knows who is capable of facing the world champion South Africans.

When the two teams meet at Townsville’s Queensland Country Bank Stadium, it will be the match which stops the rugby world.

How primed the Springboks are for the tantalising clash will only be established after two Tests against the Wallabies, but the All Blacks are primed to stake a claim for South Africa’s mantle as the world’s best team.