Rugby Australia is set to scrap the contentious ‘Giteau Law’ criteria as soon as this year’s spring tour in an attempt to bolster the Wallabies after yet another Bledisloe Cup belting.

As the Wallabies licked their wounds while travelling from Auckland to Perth on Sunday, the Herald can reveal RA plans to broaden the pool of players that coach Dave Rennie has at his disposal by loosening the controversial Giteau Law.

The Giteau Law – which allows overseas-based players to be eligible for Wallabies selection if they’ve played in more than 60 Tests and spent seven seasons in Australia – was introduced ahead of the 2015 Rugby World Cup, largely so then-coach Michael Cheika could pick Matt Giteau and Drew Mitchell in his squad.

It has been tinkered with in subsequent years to include players who have signed a contract to return to Australia, and in 2020 the national coach was given an exemption to pick two players who didn’t meet the criteria.

The lure of richer competitions in the UK, France and England hasn’t abated, however. And after an inexperienced Wallabies team copped another Bledisloe Cup belting at the hands of the All Blacks, RA chief executive Andy Marinos told the Herald the governing body plans to radically overhaul the eligibility criteria.

“When you look at the pool of talent from which we are selecting in comparison to our biggest rivals; be it New Zealand, be it South Africa, be it Argentina, be it England – they have access and the ability to choose their very best players no matter where they’re playing,” Marinos said.

“We do need to look into eligibility. I’m not saying it’s going to be alpha and omega. But it will certainly bring a lot more experience and a lot more depth across the board.”

Marinos was the director of rugby in South Africa when the Springboks made the decision to pick overseas-based players, and the proud rugby nation has reaped the rewards in recent years. 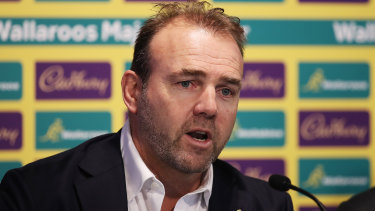 Andy Marinos has foreshadowed the end of the ‘Giteau Law’ to boost the Wallabies’ competitiveness.Credit:Getty

“I’ve lived through this and I’ve seen this movie before, when I was in the director of rugby role in South Africa. We were faced with exactly the same scenario,” Marinos said.

“I’m not saying what worked in South Africa is the recipe for here. But we have to look at the eligibility piece to make sure we have the best players available to play week in, week out.”

How the rule will change is still being examined by Marinos plus RA board members and former Wallabies Phil Waugh and Daniel Herbert.

One option would be to bring the number of Tests required to qualify for overseas-based selection down to 15 or 20 Tests, which is just under two full international seasons.

Another would be to allow Rennie to handpick more than two players, as he did with Samu Kerevi last week. Players who are currently overseas and do not meet the existing 60-Test criteria include Rory Arnold, Will Skelton, Tolu Latu and Sean McMahon.

Marika Koroibete, who currently sits on 37 Test caps, is heading to Japan next year but could still be selected for the Wallabies.

“I’m not saying we have to open the gates completely. Not at all. But we have to be more specific in identifying where we need to bolster the team, so that when we put a team out on the field we have the best against the best,” Marinos said.

“We need to be able to choose from as broad of a pool as possible. That’s all part of building a high-performance program.”

Marinos made the point that the world rugby market has changed dramatically in the six years since the Giteau Law was introduced. Japanese clubs have emerged as a financial powerhouse, pulling many emerging Australian stars out of Super Rugby clubs.

It was also brought in specifically to suit a group of players, rather than the whole code in Australia.

“In my view, the Giteau Law was brought in at a specific time in the calendar for a specific group at the 2015 World Cup. That’s something we are now working on internally, figuring out what the eligibility piece looks like,” Marinos said.

“It’s not the [whole] answer. But it’s a part of a holistic view of the game and what we need to address.

“We need to be able to invest into grassroots, so we are building a pathway for the future. We need additional investment in the game, so we can retain and invest into our high-performance program, so we improve each week and we have the best available talent.”