A proud Trent Robinson says he has no concerns over new Sharks coach Craig Fitzgibbon raiding the Roosters’ roster, insisting there’s a code between rival bosses to prevent a transfer frenzy.

Robinson, who gave his blessing to his long-time assistant to begin his head coaching career at Cronulla next year, claimed it was time for Fitzgibbon, a Roosters life member, to step into the Cronulla hot seat. 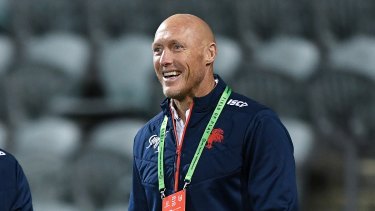 Craig Fitzgibbon will coach the Sharks in 2022.Credit:NRL Photos

“He will be right juggling [that balance at the Roosters this year]. But that’s a part of the role.”

Fitzgibbon is the latest coach to be poached for a top job having been immersed in the Roosters’ system under Robinson, following Adam O’Brien, Justin Holbrook and Paul Green.

Asked what advice he would give Fitzgibbon about his first head coaching role, Robinson said: “Be authentic and be you. Coaches that try to mirror others and emulate someone you’ve worked under doesn’t work. You’ve got to go out and carve your own path.”

Fitzgibbon is trying to lure Penrith assistant Cameron Ciraldo to be part of his support staff next year, but is yet to be told of his decision.

Panthers coach Ivan Cleary said it won’t be a distraction for his premiership favourites, who travel to Brisbane to take on the struggling Broncos on Thursday night.

“We had a chat and that will remain private between me and Cam, but I think we all know the situation,” Cleary said. “It’s not really too big of a consideration for us at the moment. There’s no finality about it.

“I think Cam loves it here and we love him here, that’s pretty obvious. That’s all I can really give you at the moment. I don’t think he wanted it to be out in the public.”