Joseph Suaalii has brought in the big guns.

It’s time to talk turkey with the Roosters after finally being granted a release from arch rivals South Sydney. Months of wrangling have come down to this and a lone Roosters representative is tasked with securing the signature. On the other side of the table sits a 17-year-old student who has never negotiated anything more difficult than a maths exam. 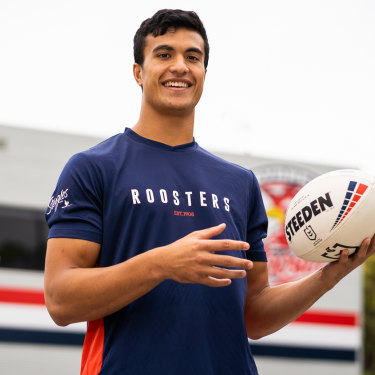 Having matured physically faster than his fellow students, Suaalii has taken steps to ensure he doesn’t fall behind them academically. Which is why he began his school year in January, while the rest of the classmates were still on summer holidays. The goal is to get an ATAR high enough to earn entry into his university course of choice, and it explains why Suaalii is often the first through the doors at the Roosters.

Last Tuesday a tutor was spotted going over the English syllabus with him at 7am.

It was, quite literally, a money shot.

Freelance photographer Paul Seiser has been shooting schoolboy rugby for over a quarter of a century, selling a small selection to proud parents. But it is a passion that often leaves him out of pocket.

“It’s often a waste of time from a financial point of view,” Seiser said.

That is, until he took what were until recently the only known action photos of Joseph Suaalii.

The setting was the David Phillips Sports Field, the training grounds of the Waratahs in Sydney’s east, on June 29, 2018. The GPS First XV was in action and Seiser’s lens was trained on the tall, headgeared kid on the wing for the GPS team. 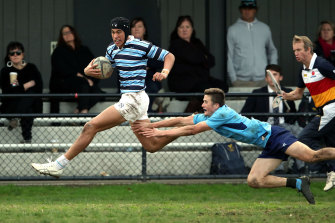 Despite still being only 14 and in year 9, Suaalii strode out like Jonah Lomu, with an opposition winger reprising the role of Mike Catt.

Seiser pressed the shutter button. After years of snapping away for little return, the photographer had a few pictures of Suallii – but they sat unused on his website for well over a year.

After news exploded in 2020 about Suallii’s contract tussle with Souths, Rugby Australia and later the Roosters, however, Seiser’s pictures suddenly began to rake in the royalties.

“That was a pretty nice photo to get, you’re seeing a kid perform before he’s actually anyone,” Seiser says. “You can see the balance, the power and athleticism within that photo.”

In his time covering schoolboy football, Seiser has never seen someone so young and yet so dominant.

“Every time he gets the ball, you just expect something to happen,” he said.

“It’s like when David Campese gets the ball – everyone pays attention, is on the edge of their seat. You expect something freakish to happen and more often than not, you’re not let down.”

But there was something else about that image that resonated for Seiser. It was taken before Suaalii had found himself in the centre of a bidding war between RA, the Roosters and the Rabbitohs, or had the NRL assessing an application to bend the rules to accommodate the “it kid” of schoolboy footy.

Seiser’s photo just captured a kid playing footy in the park with his mates.

“You see that rawness there,” Seiser said.

“In the back of your mind you’re thinking ‘these are nice photos’, but it’s more about seeing that rawness in the photo. You’re trying to capture that joy, that emotion, that [love of the] game.”

On Saturday, a plethora of photographers will converge on Seiffert Oval to shoot Suaalii’s club debut. Seiser’s monopoly on Suaalii imagery, and the royalties that come with its use, will end.

“I assume that after this weekend, I’ll be back into the coalmines,” he quipped.

When Suaalii runs out in the famous red and black Bears jersey at 2pm on Saturday, it will be his first game of rugby league since April 2019.

“He’s one of the most gifted athletes I’ve coached over my time and I’ve been in that space with Harold Matts and SG Ball for 20 years.

“He was my captain. I would say he’s the most mature footballer I’ve ever had.

“If he can develop with the strength and power he has got, he could develop into Israel Folau, the same sort of footballer.

“But it’s been a long time between drinks. It’s going to take a while to find his feet again.”

Sydney Swans legend Michael O’Loughlin, a friend of Sheehan’s, was a special guest at some of Suaalii’s training sessions.

‘[O’Loughlin] just said ‘Who is this kid?’” Sheehan recalled. “When he saw Joseph, he was just blown away by what he can do on the football field.

“It’s not just how he plays rugby league, it’s how he can mark a ball.

“He could be a league player, a union player, an AFL player. He’s just so talented, he could do anything.

“The kid has a big future. We should get him into chess, see how he goes.”

Sheehan’s only concern is Suaalii’s lengthy lay off. Suaalii sat out the entire GPS rugby season last year to sort out his future, despite enjoying a boarding scholarship worth more than $65,000 at King’s. That decision angered some of his teammates, who felt he was putting himself above them.

The Bears game will be Suaalii’s first proper hitout since being part of the Australian under-18s schoolboy rugby side toured New Zealand in October 2019.

“It will be good to see Joseph in a North Sydney Bears jersey and I’m looking forward to watching him play,” said Bears coach Jason Taylor.

The Roosters will seek an exemption from the NRL to allow Suaalii to play first grade before the requisite age of 18, a milestone he will reach on August 1. The rule was brought in to protect youngsters from the pressure that comes with being thrust into the spotlight before they are ready to deal with it. It won’t protect Suaalii from the glare that will engulf him in Queanbeyan on Saturday. Whether he is equipped to handle it remains to be seen.