Rugby Australia’s push for constitutional reform is gaining momentum following a meeting in Sydney where member unions from around the country agreed in principle that changes needed to be made.

RA chairman Hamish McLennan has previously described the game’s federated model as “archaic” and “mind-numbing”. He feels it has been a stumbling block for reform. 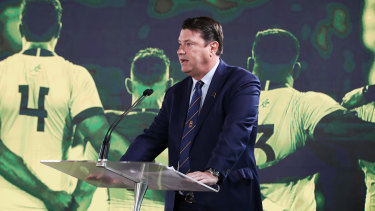 “This is the first of a number of meetings we will have throughout the year as we work in union for the benefit of our game.”

There have been slight changes to the constitution in recent years but in 2012 the Australian Rugby Union (now Rugby Australia) voted to adopt a new governance model and changed its voting process following a review by former federal senator and sports minister Mark Arbib.

There was a voting number increase from 14 to 16, with NSW and Queensland currently receiving three votes each: one for member union status, one for having a Super Rugby team and one for having more than 50,000 registered participants. Other state and territories receive one or two votes.

It is unclear whether RA’s private equity pitch was agreed to by all parties.

Last month RA announced a $27.1 million loss in 2020. At the time, McLennan said talks were progressing well with private equity.

“We’ve started organising documents, we’re off and running in that regard,” McLennan said. “The stake will be between 10 and 15 per cent, probably 12.5.”

“I’ve been a strong supporter of private equity since we took it to Rugby Australia two-and-a-half years ago and had it thrown back in our face,” Davis said. “Structured appropriately, with the right governance model, it provides a much-needed source of capital and it will drive content. I think the headline benefits are substantial.”