An unimpressed Ricky Stuart has thrown down the challenge to drink-driving duo Corey Horsburgh and Corey Harawira-Naera to try and win their spots back in his Raiders team.

As Stuart praised the work ethic of premier prop Josh Papalii – and wished he boxed every off-season given his supreme physical condition – he was not as complimentary for the two Coreys. 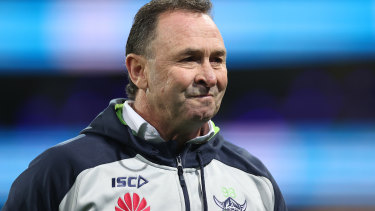 Both players were charged with drink driving over the Christmas period and await their respective days in court.

While the NRL is set to ban them from the opening rounds of the season, Stuart says it is up to the pair how they move forward.

“I’m disappointed with their choices, but it’s not my job to get a spot in this team – that’s their job,” Stuart told the Herald before he attended his Ricky Stuart Foundation annual lunch.

“The boys know how disappointed I am. 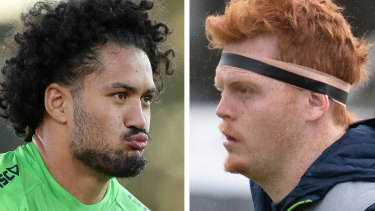 “They’re two key forwards and depending on what happens [with the NRL and courts] they’re going to have fight their way back into the team.

“All they’ve done is give someone else an opportunity now.”

Horsburgh returned a low-range reading and allegedly stopped drinking for nearly two hours before hopping behind the wheel. The NRL are likely to reach a decision before the season proper with his court date set for February 23.

Harawira-Naera is not due to appear before a judge until March 25, making him eligible for selection the opening two rounds against Wests Tigers and Cronulla, but Stuart has made it known the Kiwi is little chance of being considered for selection.

Harawira-Naera was cut by the Bulldogs last year and deregistered by the NRL for his part in the Port Macquarie scandal, which was later overturned on appeal.

Papalii, meanwhile, has given Stuart plenty of reason to smile as he prepares for his first boxing bout against former Queensland forward Ben Hannant on Friday night.

To understand what Papalii’s first fight meant for his actual body, Raiders’ head of high performance Nigel Ashley-Jones revealed the game’s best prop had avoided entering Fat Club for the first time in his first-grade career.

Set a goal of returning to training at 120kg, Papalii was 118.2kg on day one of pre-season. Ashley-Jones added his 1000m shuttle target time of 4:03mins was beaten by ten seconds, while his DEXA scan, which helps measure skin folds, was set at 25 per cent, only for Papalii to return at 24.8 per cent. 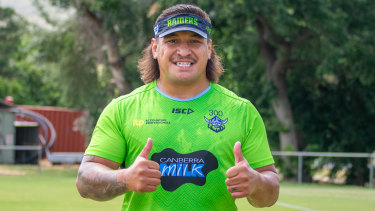 “He can fight every off-season if he wants,” Stuart said.

“‘Papa’ has always been disciplined, he’s never a problem when it comes to doing work, but with the extra training with his boxing, he’s had no issues with his weight this time.

“Steve Babic is his boxing coach and he’s been communicating with our high-performance staff and we’re making sure his loads are right and we don’t burn him out.

“We’re working hand in hand so we have him in the best physical condition for his fight on Friday night, but more importantly so he’s in good shape when he resumes training with us on Monday.″⁣

Papalii, who has chosen to enter the ring to a traditional Samoan song – he wants to dedicate the fight to his father, Patrick – told the Herald from Townsville on Thursday the preparations had not only done wonders for his fitness but freshened him mentally.

“A lot of people have spoken about my weight, but mentally I haven’t really thought about footy for the past nine weeks, my focus has been on boxing and learning things I’ve never learned before,” he said.

When asked who awaited him in the ring after Hannant, Papalii quipped: “Sticky”.