If Ricky Stuart thought his players were “embarrassed” last week after a 35-10 loss to Parramatta, what will he make of this result?

The Raiders managed to blow a 24-6 lead over the Cowboys in an error-ridden performance in Townsville that included a controversial try to North Queensland centre Justin O’Neill that proved crucial to the outcome. 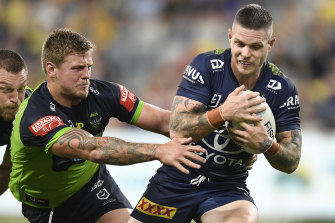 O’Neill was ruled just onside in a late kick chase as the Cowboys won 26-24 after rattling off 20 unanswered points. The Raiders fumbled and bumbled their way to another defeat and Stuart will likely be just as incensed as he was when he claimed individuals in his side “were happy to put on an NRL jumper and think they’re an NRL player”.

They once again failed to score a second-half point and clearly missed the input from injured fullback Charnze Nicoll-Klokstad. North Queensland fullback Valentine Holmes was man of the match and looks to be making a strong charge back towards another Maroons jumper.

Both sides traded tries to start the contest, with Jordan Rapana crossing in the corner after 13 minutes. Kyle Feldt returned the favour four minutes later.

But Canberra made the better headway and looked as if they had responded to their coach’s broadside last week. Josh Papalii charged towards the posts and set up fellow prop Emre Guler with a late offload as the Green Machine scored again.

Rapana strolled over for a second try as the Cowboys were shredded on their right edge and things began to fall apart from the home side. When George Williams put the Raiders up 24-6 near half-time, it looked all over.

Then, a ray of hope for the Cowboys as Ben Condon struck just before the break after an error from the restart by Canberra. The Raiders were still in charge, but it was a crucial try and set the Cowboys on a charge to the lead in the second half.

Reece Robson started the comeback proper when he scored five minutes after the resumption of play but it was O’Neill’s try in the 58th minute that proved the talking point. He successfully chased Scott Drinkwater’s kick and, if he was onside, it was by the barest of margins.

Penalties are a rare commodity in PVL-era rugby league but Holmes stood tall when his chance arrived deep in the second half. His 69th-minute penalty was good enough for a two-point lead and the Cowboys defended it desperately, with all hands on deck to stop Jack Wighton short of the line as he made a desperate surge.

More errors from the Raiders, including from senior players, put Canberra under immense pressure from which they never recovered. They have lost three in a row and must try to rebound in a tough assignment against the Rabbitohs.