St Kilda, fresh from qualifying for the club's first finals series since 2011, have welcomed the AFL's controversial pre-finals bye with one of their key players battling a hamstring injury.

The AFL decided on the bye in late August, with some suggestion that it would be a negative given it meant players and staff had to spend more time in their hubs. 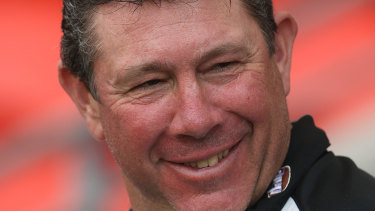 Ratten says the bye can give them more than just potentially getting Zak Jones back. Credit:Getty Images

"That’s probably what it does for us, it probably allows Jones the opportunity to play.

"He has been a great contributor to us this year."

The Saints smashed GWS on Friday night without Jones, however when the former Sydney midfielder has been in St Kilda's side his speed off clearances and in space has been difficult to stop.

The bye will benefit other clubs too, with Geelong, Richmond and West Coast able to get key players back from injury and quarantine in better time and Collingwood allowed to possibly get Steele Sidebottom back for their second final, should they win in week one.

Ratten also provided an update on the baby boom in St Kilda's hub.

Captain Jarryn Geary's partner Emma is 39 weeks pregnant and in the hub, with Ratten saying "it's nearly day by day".

"Mel will be 39 weeks on first week of the finals," Ratten said.

"We’ve had a chat to Jake to sort of see where he’s at and he’s going to go through everything with Mel and see what it looks like.

"The decision will be up to him. If he wants to go back for the birth that’s fine. But he needs to work through with Mel what they want to do with the family.

"He will probably play the first final."

Dan Hannebery played his first game since round five on Friday night, with 13 disposals, two clearances and four inside 50s at 76 per cent disposal efficiency.

Playing him straight out of quarantine was a risk that paid off.

"His ability to affect others or influence others on the ground is so critical and whether he touched the ball 20 times or 10 he was going to help and support others and I thought he did that," Ratten said.

"It was a risk but I suppose when it comes to this part of the year we make these decisions."