Port Adelaide overcame a squall of sore bodies, a bout of goalkicking yips and the modern era’s mightiest dynasty to reset their premiership drive in the most gutsy fashion, winning by just two points.

Embarrassed last Saturday in Perth by West Coast and faced with the might of dual reigning premier Richmond, the Power scrapped their way to the finish line – fighting against an imposing opponent, physical warfare and, at times, against themselves – in an Adelaide Oval classic.

Connor Rozee (corked thigh), Orazio Fantasia (rolled ankle), Tom Clurey (corked thigh), captain Tom Jonas (ankle), Xavier Duursma (knock) were all battered but unbowed, while Zak Butters (left ankle) was eventually subbed out of the contest midway through the fourth after he had arguably been as influential as anyone on the park. 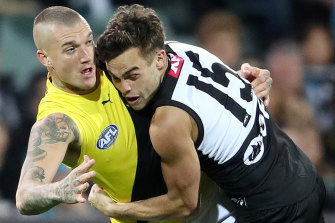 There were pangs of deja vu from last year’s gripping preliminary final at the same venue – which the Tigers won by six points.

Perfect autumn weather met the players on Friday night as opposed to the heavy showers the players slogged it out in last October, but otherwise there were some eerie similarities … Dustin Martin’s one-on-one fend-off of Darcy Byrne-Jones, Toby Nankervis’s intercept marking and the trend of play which had Port in command at half-time, everywhere except the scoreboard.

The reality is the Power could – and should – have buried the Tigers by the main break.

The home side turned a five-point quarter-time deficit into a seven-point advantage at the long break but six missed set shots in the second term, with overwhelming edges in clearances (21-8) and inside-50s (18-8), kept Richmond on the back foot but well in the fight.

The Tigers dictated the territory battle in the third stanza, taking the lead after Jason Castagna goaled on Jack Riewoldt’s assist.

But Port struck back with three straight goals, capped by a Hamish Hartlett 60m bomb to recapture the lead – 11 points at three-quarter-time.

Martin started the fourth in the middle against fellow superstar Travis Boak before drifting forward, shrugging off Port debutant Lachie Jones in trademark fashion and goaling across his body to set the Tigers on their way, before giving Boak a butt tap of respect.

Lambert gave Richmond the lead back before Robbie Gray marked and goaled expertly to put Port, against the flow of play, back in front.

Camped in their back half repeatedly, battling an injury-shortened bench and a host of sore on-field bodies, the Power rose magnificently to the occasion.

BUTTERS THE BIGGEST OF THE BIG THREE

Before succumbing to a game-ending injury, Butters was arguably best-afield. He endured some growing pains in last season’s preliminary final defeat to Richmond but, after a quiet weekend against the Eagles, he was back to his best on Friday with his playmaking, smarts, courage and ball-magnetism.

Rozee is the most eye-catching of the triumvirate, Duursma provides the crowd-pleasing panache but Butters looks the most likely to be a 300-gamer at the proud club.

Evergreen Riewoldt continued his rich start to 2021 with three first-half majors to give Clurey headaches and keep the Tigers in the game.

Riewoldt has been just one beneficiary of the big spearhead rebirth, staving off whispers of a career decline to enjoy his best beginning to a campaign since 2013.

He couldn’t quite haul his team across the line on Friday but further big bags and potentially more finals joy await the true great Tiger. 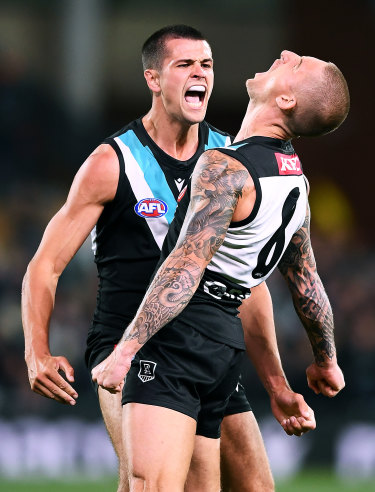