“What solved yesterday’s problems doesn’t automatically solve today’s problems. While we must honour and respect our past champions and administrators for their time and deeds, we mustn’t let their times and deeds be the only things that determine our future.” – ALLAN JEANS

Football coaching is a results-based business and coaches stand or fall based on flags and ladder position.

Normally that is true. At Collingwood this was only partly the case for the hand-wringing decision to part ways mid-year with the revered Nathan Buckley. 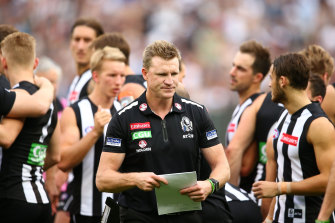 Nathan Buckley is stepping down as Collingwood coach.Credit:Getty Images

If results alone dictated coaching tenure then Buckley – a kick off a flag in 2018, a preliminary final in 2019 and a semi-final in 2020 – would have been safe, notwithstanding this year’s poor return.

Their results this year, especially after the list trauma at the end of 2020 and the ongoing sideshow of the boardroom jousting were not enough in isolation to draw into question his time as coach.

It was more nuanced and multi-layered than that and his own view on whether he wanted to go on with the job was very significant in the decision-making.

In part it was Buckley’s doubts about being the man to be there for several more years to see them through that moulded the club’s own thinking.

Buckley’s reluctance is understandable, for private matters have weighed heavily on him. Last year he went four months without seeing his sons and this year entered another lockdown. His private life has been the subject of paparazzi and breathless gossip columns. These things take a toll.

The club was meanwhile agonising over its position, also wondering if after 10 years it was not time for a fresh voice.

Performances rather than results might be the better measure of how Buckley was being assessed.

At the end of last year, when the club took aggressive list-management decisions to cull players in a fire sale it was a decision taken overwhelmingly because of the salary cap problems. But it wasn’t just that.

The club recognised it was drifting year on year from a flag and from competing with the best teams. The Pies knew they had to change and improve their list of players, but they also accepted the way they were playing had to change.

A thread running through their teams as they played and fell short in the finals was that they had struggled to score. They had to be more attacking in how they moved the ball and in how they attacked.

But when the new season came around, the list had changed but the game had not. Or not enough.

Round one, they played defensive wings that rolled back behind the ball. They sucked two or three forwards up the ground. They broke from stoppages with a chain of handballs out the back of packs to concede territory, settle play and buy themselves time before attacking.

They still wanted to possess the ball safely by foot and build it up patiently from defence. They crept up on the goals.

It was a system that had served them well, but not well enough, and in a new season it hadn’t changed. The competition, however, had.

Buckley is philosophically a defence-first coach. Most coaches tend to say that. It should not be seen as a binary equation, where you are either in favour of attack or defence. It is striking a balance between when and how to attack and how to set up to defend. Melbourne and Richmond do it better than anyone.

Buckley’s coaching stems from a starting point of stop them scoring first and then try to score. Collingwood have been more focused on preparing themselves to defend the attack that gets turned back on them than they have on the initial attack.

Collingwood had many games where they were never out of it on the scoreboard but never felt entirely in it, either, because of their inability to kick a big enough score.

You cannot play all-out attack or you end up like Carlton, exposed behind the ball. But Collingwood’s balance has been out.

This is not the reason Buckley is no longer coach, but it was one factor informing the decision.

The players have looked like they are playing with a handbrake on. They have looked to be burdened by the fear of a mistake so their first thought has been to look sideways and down the line not to the corridor and to fast play. They so often look like players second guessing their instincts.

Interim coach Robert Harvey would be well advised now to borrow from the caretaker coach manual and instruct his players to play with freedom for the rest of the year.

Harvey would be unlikely, and ill-advised, to throw out all they have been doing because they have been doing a lot right. But he could comfortably tell the players to take the shackles off and play the game instinctively without abandoning their defensive game entirely.