Collingwood’s AFLW side will remain coached by Steve Symonds in 2021 while Geelong have hired internally to replace their head of women’s footy.

Symonds led the Pies to their first AFLW finals campaign in 2020, losing to North Melbourne in a semi-final. 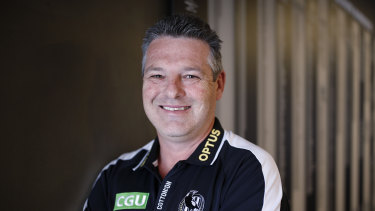 Meanwhile the Cats announced on Thursday that Brett Johnson would switch from the club’s performance and development manager to the role of head of AFLW, football pathways and player development.

It comes after former Cats’ head of women’s footy and pathways Simone Bellears was cut in August amid the AFL’s coronavirus money crunch.

“Brett is highly respected at our club and in the football industry, and he has great experience across a myriad of areas in football,” Geelong’s general manager of football Simon Lloyd said.

“This is a major role in our club. The AFLW team has shown improvement over its two years and we will now look to grow it even further as we seek more on-field success.

Johnson played 70 AFL games with Hawthorn and Carlton and captain Williamstown in the VFL for five seasons.

Carlton announced on Thursday that former Western Bulldogs and Diamond Creek player Lauren Morecroft would join the Blues as their midfield coach for the 2021 season. She was midfield coach at North Melbourne in 2020 and 2019.

Victorian AFLW players are hopeful they can begin training in groups of up to 10 by the end of October, as per the state’s road map out of coronavirus restrictions.

Pre-season officially commences on November 4 although that will still be restricted, with the plan to ease rules around exercise and contact sport not kicking in until November 23.

AFLW budgets and resources are precariously placed amid the pandemic's financial constraints on clubs.

As well as the Cats' head of footy departing, North Melbourne coach Scott Gowans was let go and replaced by Darren Crocker (who will coach the team and be a men's scout) and Richmond announced they would not field a VFLW side in 2021.

Dual premiership winner and league best and fairest Erin Phillips said earlier this week she feared more budget cuts were coming to AFLW in the future.