The AFL will assume unprecedented control over its clubs as part of the revolutionary new rescue package put forward on Thursday night to the 18 club bosses. 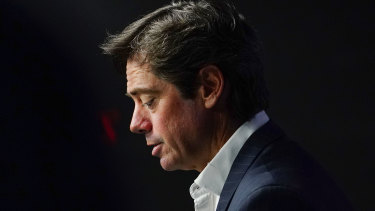 The move has left the financially stricken clubs disappointed and demanding to understand how the gap will ever be narrowed between the rich and the poor. It has also left several clubs seriously questioning the future of their AFLW teams.

St Kilda chairman Andrew Bassat, whose club is in debt to the tune of $12 million, emphasised those fears in Thursday's telephone hook-up, pointing out some clubs would now find it virtually impossible to achieve success.

And to underline the increasing differences between the ''haves'' and the ''have nots'', the wealthier clubs such as West Coast, Richmond and Collingwood – disenchanted at having to follow receivership rules – have achieved a special clause in the new agreement. This will exempt them from having to regularly open their books to head office.

In a series of developments over the past 24 hours it has emerged:

The final draft agreement was drawn up and delivered to clubs on Thursday night after significant disquiet among board members across the competition concerned at the implications for club directors.

Further divisions emerged with clubs questioning the unfairness of the debt-free financial circumstances of Gold Coast and Greater Western Sydney, which are funded each year to the tune of roughly $25 million respectively.

Should the football season commence by early August the prevailing view is that Essendon, the Western Bulldogs – which recently sold off a large parcel of gaming machines – and potentially Adelaide retain sufficient cash flow to survive without borrowing from the AFL's $600 million pool.

The fact that only one-third of the 18 clubs boast bank balances that could take them through to the end of July has underlined the false nature of the profits announced by the majority of the clubs at the end of last season.

While several clubs sought independent legal advice, Western Bulldogs chairman Peter Gordon has engaged legal opinion that has been made available to all the clubs.

The AFL has engaged one of Australia's most respected lawyers, Arnold Bloch Leibler's Leon Zwier, who worked with the commission as it negotiated the $600 million NAB/ANZ bank loan and then advised on the complex negotiations with the 18 clubs.

Zwier, a litigation and corporate recovery services expert, previously worked with the Victorian Government as it negotiated out of the proposed East West Link project.