Officials have locked in a six-week Super Rugby trans-Tasman competition to run from May 14 until June 19 which features a special 'Super Round' with all five Australia and five New Zealand teams doing battle in one location.

As revealed by the Herald earlier this week, Rugby Australia and New Zealand Rugby have been working towards a trans-Tasman tournament that will take place after their respective domestic Super Rugby tournaments. 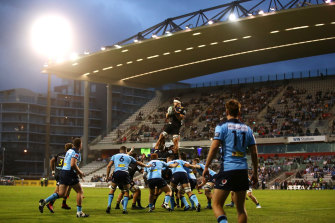 Rugby administrators have signed off on a six-week trans-Tasman competition. Credit:Getty Images

Starting a week after Super Rugby AU, the competition gets under way on Friday, May 14. The five matches in each round will be played on Fridays and Saturdays.

While dates and locations are yet to be 100 per cent confirmed, the rough round one draw shows the Waratahs hosting the Hurricanes, the Western Force taking on the Chiefs in Perth and the Melbourne Rebels doing battle with the Blues.

The Brumbies and Queensland Reds are likely to begin their campaigns across the ditch with fixtures against the Crusaders and Highlanders respectively.

Australia’s five teams will all take part in five matches against Kiwi opposition.

Round Three – Super Round

Every side will play two home games and two away games, as well as being involved in a ‘Super Round’ that has been set down for round three in one location on May 28 and 29.

Australian teams may be forced to make two separate trips across to New Zealand depending on the draw but every effort will go to ensuring as little travel occurs as possible, particularly for the Western Force given their location.

The two highest ranked teams, irrespective of whether they are Australian or New Zealand, will square off in a final on June 19.

All 26 matches will be show live and ad-free on Stan Sport, while one match per weekend will be live on the Nine Network.

"This is a truly historic day for rugby in the southern hemisphere, with the first-ever Australian and New Zealand Super Rugby competition," Rugby Australia interim chief executive Rob Clarke said.

"This will generate enormous excitement across both countries with some of the best players in the world set to challenge each other after the conclusion of Super Rugby AU and Super Rugby Aotearoa.

"It will be a really exciting new product for our 2021 broadcast partners, Stan and Nine, and I know fans right around the world will be glued to their screens and devices to watch it all.

"The Super Round is also great initiative with one lucky city to host all 10 teams on one weekend in a Super Rugby extravaganza."