We take a look at the highs and lows of another dramatic season, in which the Penrith Panthers finally broke the Storm-Roosters duopoly to show there is another blueprint for premiership success. 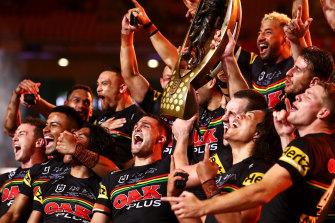 The Penrith Panthers fell at the final hurdle in the 2020 decider. They made no mistake this time around.Credit:Getty

Word of the year: crackdown

Everyone in rugby league seemingly knew what a head-high tackle looked like. And then came Magic Round.

What should have been a celebration of football at Suncorp Stadium became a debacle as 14 players were sin-binned and three were sent off.

“I hope they don’t change now if that’s going to be the precedent – we’re going to find a completely different game of rugby league [to the one] we’ve been following for many years,” Canberra coach Ricky Stuart said.

In the ensuing rounds, every single contact with the head – intentional, incidental or barely glancing – resulted in the defender being put in the sin bin, placed on report, suspended or all of the above.

It wasn’t much of a spectacle as players tried to adjust on the run, and the fans were livid. The NRL was right to make the safety and welfare of the players a top priority, particularly as the threat of concussion legal actions loomed large. But this was not the way to do it.

Had there not been a correction from officials late in the season, there wouldn’t have been enough players to finish the competition. Thankfully, the season was saved by a gripping finals series. With only the best teams left to vie for the prize, we finally saw the right balance between attack and defence as the blowouts finally abated.

In any given season, there are myriad challenges that must be overcome. This year, the crackdown on high shots and the relocation of the competition to Queensland were chief among them.

Penrith adapted better than their competitors and were duly rewarded. In doing so, they provided a blueprint to their rivals for future success. This is a club that has invested heavily in junior development, ultimately resulting in a slew of local products playing in consecutive grand finals. In lifting the trophy, the Panthers have broken a Melbourne-Roosters duopoly and shown the rest of the competition another way to get results.

The Cleary family. In a bid to win a premiership, the Panthers outlaid about $10 million to reunite Ivan and Nathan Cleary. Many felt it was a significant gamble at the time, but it has paid off handsomely. Ivan Cleary was beginning to be unfavourably compared with Brian Smith; the man who couldn’t quite get you all the way to a premiership. That talk has been put to bed. 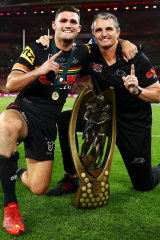 This was also the moment Nathan Cleary became a genuine superstar. The knock on him the previous season was that he didn’t step up in the big games: during Origin and the grand final. This time around, he owned those stages.

Tommy Turbo. Tom Trbojevic’s year began with him being beaten in a race by “Harry”, but by the end of it the Manly fullback was streaking away as the standout player in the NRL. Despite missing the opening five rounds, “Tommy Turbo” won every conceivable accolade; the Dally M Medal, the Wally Lewis medal, the Brad Fittler Medal and the RLPA’s Players’ Champion.

In 18 appearances, he scored 28 tries and set up just as many. It was one of the most dominant individual performances in the history of the game.

NSW Blues. This is a feat that may never happen again. Brad Fittler’s side won the series 2-1 despite having to play all three matches on enemy territory in Queensland. The Blues had at their disposal the two hottest players on the planet, Tom Trbojevic and Nathan Cleary, to provide the ultimate one-two punch. New Maroons coach Billy Slater faces a much more difficult Origin challenge than he encountered during his playing career.

Wests Tigers. It has been a decade since the Tigers played finals footy. There are any number of reasons for this, many of them laid bare in the ill-fated documentary Wild Wests: Tales From Tigertown. The fact it took so long to decide whether to back or sack Michael Maguire is an indication of just where the club is at. Tim Sheens has got a very big job ahead of him.

Tyrone May. Despite the ordeal he put the victims through, Tyrone May has never taken responsibility for his actions in the sex-tape scandal. Worse still, he appeared to portray himself as the victim in a controversial social media post that ultimately led to his sacking. The Panthers, despite pressure from the Clearys to save him, had no other choice.

Israel Folau. Why do football clubs still bother trying to sign him? First it was the St George Illawarra Dragons, who copped all the bad publicity associated with Folau without actually jagging his signature. Then he put the Southport Tigers through an altogether different ordeal after the fading star was involved in a messy split with Catalans. Now Folau could be linking with Clive Palmer again, reportedly to run as a politician.

The NRL says it doesn’t have a drugs problem, but the off-season antics of its players suggests otherwise. Cocaine appears to be the poison of choice and, given the lack of consequences for those who dabble in the devil’s dandruff, it comes as no surprise. Had the Panthers not stood down Brent Naden for the opening rounds of the season, he wouldn’t have missed a single game for taking cocaine on the eve of last year’s grand final.

No sooner had the season ended, Reece Walsh and Ofahiki Ogden were caught in cocaine controversies, while Sonny Bill Williams detailed his dabbles with the illicit substance in a tell-all memoir. Then there was the “white powder” scandal including Storm stars Cameron Munster and Brandon Smith.

Tackle of the year

Rather than picking one of those earth-shattering, front-on collisions, we’ve gone for that brilliant Xavier Coates chase on a runaway Dane Gagai.

Collision of the year

Of course, it had to come in a Souths-Roosters clash. The only thing uglier than Latrell Mitchell’s hit on Joey Manu – which ended the seasons of both players – was the fallout. It was a reckless act from Mitchell, but some of the abuse he copped afterwards was disgraceful.

A long suspension was punishment enough, but then came the death threats directed towards Mitchell’s family members.

The South Sydney fullback’s return to the game is, you guessed it, against the Roosters.

Try of the year

You could have chosen from any one of 28 tries that Tom Trbojevic scored, but this was the pick of the lot. It was a magical length-of-the-field try scored after the full-time siren against North Queensland in round 25. The Cowboys looked like they would score when Jake Granville kicked the ball into the opposition in-goal.

Instead, Reuben Garrick began a stunning counter-attack, finding open space and then Daly Cherry-Evans, who put in a kick that found you-know-who. Rugby league at its very best.

Man of the year

For all the reasons listed above, it has to be Tom Trbojevic. Jarryd Hayne, during the back-end of 2009, produced perhaps the purple-est of patches ever seen in the NRL. What “Tommy Turbo” did this year was better still. The Sea Eagles looked like wooden-spooners in the opening month of the season, but with their talisman back in the fold they were almost unstoppable. 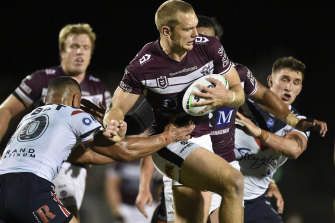 Tom Trbojevic had a sensational season for the Sea Eagles.Credit:Getty

Woman of the year

The disappointing absence of an NRLW season in 2021 makes it a narrow field of choice but a standout performance from Tazmin Gray in the women’s State of Origin earned the Queensland second-rower the gong.

Gray, who also played for the Maori All-Stars in their win over the Indigenous All-Stars in February, was a dominant figure in Queensland’s 8-6 win, with 125 metres from 15 hit-ups, and was named the winner of the Nellie Doherty medal for player of the match.

Quote of the year

“I want to win a premiership in that jersey.” Brandon Smith didn’t endear himself to Melbourne Storm officials when he spoke passionately about his desire to pull on the Roosters jumper.

This is just about the only prediction that can be made with any certainty; coaches will be sacked. Only one man, John Morris, lost his job last season, but there will be more carnage this time. Trent Barrett, Anthony Griffin, Nathan Brown, Todd Payten and Kevin Walters were all given a season’s grace after coming into difficult jobs, but now it’s time to produce. Michael Maguire will also need a strong start to keep the wolves at bay.