NRL chief executive Andrew Abdo has defended the game’s commitment to improving the treatment of women after a former gender adviser said the governing body lacked leadership in the area.

Abdo rejected suggestions made by Professor Catharine Lumby that the NRL had dialled down on their commitment toward the treatment of women since ARL Commission chair Peter V’landys had come into the game. 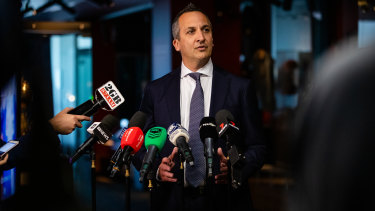 NRL boss Andrew Abdo has defended the game’s commitment to its treatment of women after a former gender adviser slammed the governing body for lacking leadership in the area.Credit:Edwina Pickles

Professor Lumby, a professor of media and communication at the University of Sydney, has worked with the NRL as an occasional adviser since 2005, but has not advised the game since 2019.

Abdo said since V’landys became ARLC chairman, the NRL had consulted a “variety of experts” on gender issues and taken advice from senior women within the business world.

“Not consulting with Catharine for a number of years now is not a sign that this is not a priority for us,” Abdo said. “Quite the contrary.”

The NRL also promoted former NRLW boss Tiffany Slater into the role of general manager of wellbeing, diversity and performance.

“We haven’t engaged with her [Lumby] for a while now which is why I was surprised by her comments,” Abdo said. “This is an area we take very seriously and are devoting resources to it on an ongoing basis.”

The verbal stoush between Lumby and V’landys came after a high-profile Eels player was videoed allegedly having sex with a woman in a bathroom.

This week, the NRL also received a complaint from a woman over Broncos star Kotoni Staggs who was kicked out of a Brisbane pub after allegedly making unwanted advances.

“Some days I feel like I’m hitting my head against a wall, and frankly, I don’t know where the leadership in the NRL is on this any more, to be honest with you,” Lumby said on Channel 7’s Sunrise on Thursday.

“I don’t see the same level of commitment I once saw, so I’m really reconsidering my position.”

V’landys responded to her comments by saying Lumby was just seeking attention and she no longer held a role with the NRL as all committees she was involved with had been disbanded.

“She is not a spokesperon. She doesn’t represent us,” V’landys told the Herald on Thursday.

Lumby has recently drawn the ire of the NRL after making a number of controversial comments around incidents involving the integrity unit.

Earlier this year, Broncos star Payne Haas was given a two-year good behaviour order and pleaded guilty to two counts of intimidating police after telling a female officer: “Cause you’re a woman you think I won’t touch you.”

At the time, Lumby told media she didn’t believe Haas should be suspended from the game and said a level of “cultural understanding” was required by the NRL.

Lumby also spoke to the media in March 2020 to defend the players involved in the Bulldogs Port Macquarie sex scandal.

Jayden Okunbor and teammate Corey Harawira-Naera were both sacked and then reinstated after bringing schoolgirls back to their hotel in Port Macquarie before a trial match against Canberra.