Facebook has banned the sharing or viewing of our news articles on its platform. For independent journalism straight from the source, download our app and sign up to our newsletters.

Alex Newsome will captain the Waratahs against the Brumbies this weekend in place of injured skipper Jake Gordon who will spend the next six to eight weeks on the sidelines.

Newsome, who has vice-captained the side in recent times, will be promoted for the round-two clash in Canberra on Saturday in Gordon’s absence. 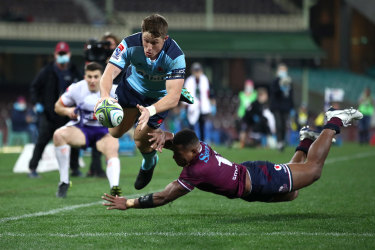 Alex Newsome is set to lead NSW this weekend against the Brumbies. Credit:Getty Images

Gordon injured his ankle on Friday in the Waratahs’ dismal 41-7 loss at Suncorp Stadium and his worst fears were confirmed on Tuesday with the news he has suffered a syndesmosis injury and won’t be back until the final few games of the season at best.

The hits keep coming for NSW just a few days into their 2021 campaign with news that No.12 Joey Walton could be out for up to three months due to an ankle injury. The Waratahs are yet to put a timeline on his return but the 20-year-old is set for a significant stint on the sideline.

Former Parramatta Eels lock Tepai Moeroa has been dealing with a knee complaint but could fill Walton’s void in the No.12 jersey for Saturday’s all-important derby in the nation’s capital.

With Waratahs recruit Izaia Perese suspended until round six following his dangerous tackle on Hunter Paisami, Newsome could shift into the centres.

“Nobby has been a leader the whole year,” Waratahs winger James Ramm said of Newsome. “He’s been around a fair while, he’s well respected by all the boys. He’ll have no trouble stepping up there.

“He’s been vice-captain before and he’s a massive leader within the team. The amount of talk he gets through on the field and at training is crazy.”

Some thought Newsome would captain NSW last year in the absence of Rob Simmons but coach Rob Penney opted to bring Michael Hooper back into the role. It is understood Penney favoured Hooper because he would be in the middle of the field more often.

Ramm can’t see why Newsome couldn’t lead the side from out wide.

“Wherever he plays, he’ll do the job,” Ramm said. “Losing your captain is huge but there’s nothing you can do it about.” 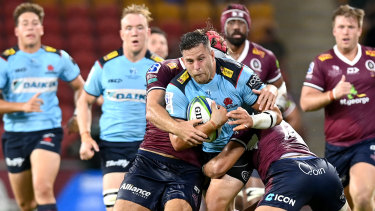 The Waratahs were comprehensively outplayed by the Reds in Brisbane.Credit:Getty Images

The Waratahs will welcome back Lachie Swinton, who has served a suspension stemming from a red card on his Test debut in Brisbane against the All Blacks. Swinton, who has lived with Newsome, endorsed his leadership qualities.

“He has an immense amount of knowledge,” Swinton said. “I don’t know if you could hear him [at training] but he’s definitely loud. He has seamlessly transitioned into that.”

Swinton is set to take Will Harris’ spot at No.6 in a NSW back row that will feature Carlo Tizzano, who had an impressive match in Brisbane, and Jack Dempsey. Swinton and Tizzano have been known to butt heads at training and the pair together could cause the Brumbies real trouble.

“He’s 110 per cent all the time,” Swinton said of Tizzano. “I have a lot of respect and just really excited to play with him.”

‘He’s 110 per cent all the time … I have a lot of respect and just really excited to play with him.’

The Waratahs are likely to bring in Mitch Short in as an injury replacement for Gordon. NSW have not beaten the Brumbies in their last six outings.

“The boys that will step in will be able to do their job, I have no doubt about that,” Ramm said. “There is a big change with three of the back line moving out but it happens. It shouldn’t be a step backwards this week.”

Meanwhile, the Melbourne Rebels will be on the road for at least a month after a schedule tweak that has forced the Victorians to postpone their first home game of the year.

On February 12, more than 50 players and staff made their way to Canberra in order to get out of Melbourne before a five-day COVID-19 lockdown was enforced.

The Rebels, who had the bye in round one, have their first match this Friday against the Reds in Brisbane. The team will fly into Brisbane on the day of their match before returning to Canberra after full-time.

Initially the group had expected to then travel to Melbourne to prepare for their round-three match against the Brumbies, but that fixture has been moved to Canberra on March 6.

The reason being that had the Rebels entered Melbourne, they wouldn’t have been able to travel to Perth, as part of the WA government’s COVID-19 provisions.

Given Canberra has had very few COVID-19 cases, the Rebels are allowed to fly into Perth from the nation’s capital.

The Brumbies will instead host the round three match against the Rebels, while the round nine game will now take part on Sunday 18 April at AAMI Park.

The earliest the Rebels could return to Melbourne is March 13 after their clash with the Force in Perth.

For a team that spent the majority of the season on the road in 2020, it is not an ideal situation, particularly for those with family stranded in Melbourne.

Provided there are no more schedule changes, the Rebels will host the Waratahs in round five at AAMI Park.

Melbourne Rebels boss Baden Stephenson said: “We can’t wait to get back to Melbourne for our home game against the Waratahs in round five and play in front of the Rebels faithful at the Stockade.

“I also want to acknowledge our partners, and the Rebels players, staff and families for their continual sacrifice and tireless efforts for the benefit of the competition as a whole.

Rebels head coach Dave Wessels added: “I would like to echo Baden’s comments and pay special tribute to the families and friends of the Rebels playing group.

“They sacrificed so much last year and we’re very grateful for their love and support. We can’t wait to get home and play in front of you over the back half of the season.”