Nathan Buckley says Brodie Grundy is a “proud man” who wants to fix his issues in the ruck, but the Collingwood coach wants his star ruckman to also spend time up forward in a bid to help the Magpies deliver at least 12 goals a match.

Grundy, 26, did not have his typical impact against the Western Bulldogs in Collingwood’s 16-point loss at the MCG, where they kicked just seven goals. 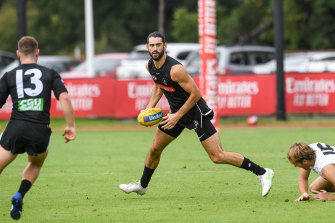 Brodie Grundy may not get the opportunity during games to work through his issues in the ruck.Credit:Justin McManus

After Steele Sidebottom (calf) confirmed his return at training on Monday ahead of Thursday’s crunch clash against Carlton, Buckley said Grundy was not one to run from a battle but suggested the dual All-Australian needed to accept help when required through a match.

“I am not sure if you know but Brodie is pretty proud. If things aren’t going well, he doesn’t want to work his way out of there,” Buckley said.

“He wants to be involved in fixing it up so we need to understand what is best for the team but we also trust the way Brodie sees the game. He has been elite player for a long time so we have got full confidence in him.”

While Grundy was coming off lofty heights, having polled 11 Brownlow Medal votes in his previous four matches against the Bulldogs, and still won the overall hit-outs, opponents Stefan Martin and Tim English were able to negate his hitouts to advantage while restricting his impact in overall play. 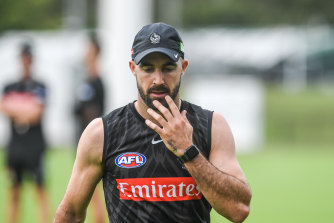 Steele Sidebottom will be back for the Pies this Thursday.Credit:Justin McManus

He appeared in all bar one of the centre bounces when Mason Cox was also an option, with Buckley admitting post-match Cox needed to be used more in the ruck.

The question for the Magpies is whether Grundy’s relatively modest form threatens to become a long-term issue, for Grundy had a quiet end to the 2020 campaign, having admitted to struggling in hub life.

He had been looking forward to the new season, in what is the first season of a whopping seven-year deal that will keep him at the Pies at least until the end of 2027. He is set to earn at least $1 million a season over the lifetime of the contract.

“I think if you are going off a one-week sample size and then trying to drag in 2020, that’s a bit of a long bow. I will be backing my guy,” Buckley said. 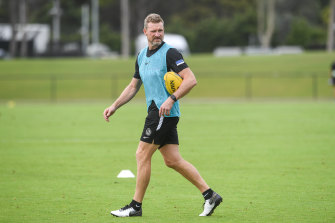 “We want Brodie to be supported by the second ruckman, whether it’s Mason Cox or Darcy Cameron or another option we go with.

“We would like that to be a legitimate tandem ruck role. We believe that Brodie can do some damage for us in front of the ball also so we weren’t able to achieve that on the weekend and we will be looking to explore that through the early part of this year.”

Former Melbourne ruckman Mark Jamar was at Collingwood headquarters on Monday afternoon, with the Pies preparing to name a new ruck coach.

Grundy has 46 goals, including only three last year, in 152 senior matches.

Bulldogs coach Luke Beveridge spoke of how Martin had been able to jump early into Grundy, helping to curb his athleticism, and this is a tactic Blues ruckman Marc Pittonet may reprise.

Jordan De Goey was, as Buckley said, “quiet” against the Bulldogs, either as a forward or when used on the ball. He failed to kick a goal among his 16 touches. Goalkicking was a major issue for the Pies last season, and Buckley has conceded they have a problem.

“We are just not scoring enough. We can take that as a one-week sample and add the last 18 months too it if we wish,” he said.

“The competition is clearly, what we saw from the first round, the ground is pretty open, it looks like there is more space, whether it’s the man-on-the-mark rule or the attitude to offence, I think it’s a bit of both. We need to find ways of hitting the scoreboard more.

“You want to be kicking 12-plus [goals], 13-plus every week if you can. If you can get 15, you are going to win most games. Obviously, 100 points is still that mythical number you want to get to consistently but average scoring has gone down over the last 10 years incrementally but this year might be the first where you get an uprise.”

There is always plenty of feeling when the Magpies take on their traditional rivals, but the pressure gauge will ratchet up on the losing coach, for only five of the last 58 teams to start the season 0-2 have made the finals.

“Not even thinking about being 0-2,” Buckley said.