To think that only a week ago, we were complaining that the NRL had become too predictable.

On a night when outsiders Manly put 36 unanswered points on the Titans and the Wests Tigers pushed Souths to extra time, Parramatta secured their first win in the nation’s capital since 2006. 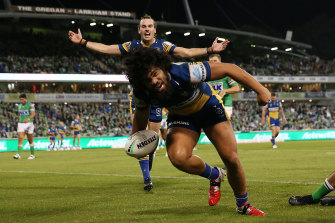 Isaiah Papali’i celebrates after scoring a try in Canberra.Credit:Getty

The 35-10 win lifts the Eels into the top four and ends one of the longest away hoodoos in the NRL.

It was secured courtesy of perhaps the best kicking performance in the career of Mitchell Moses. With Dylan Brown suspended due to a crusher tackle, the halfback almost always found his mark. From the very first kick of the night, Moses drew a mistake from Jordan Rapana. So he kept kicking at him.

Whether they were short kicks or long, they found space or pinned one of Canberra’s back three somewhere near their try line. On one occasion, he fumbled the footy on the last tackle but still managed to regather and produce a touch-finder.

He sealed the result with a bomb that finished in the hands of improving hooker Reed Mahoney and then iced the cake with a field goal that hit both the post and the crossbar.

“He’s a great kicker, I think he’s got one of the best kicking games in the competition,” said Parramatta coach Brad Arthur.

“When he just worried about getting his defence on and kicking well, the attacking brilliance that he’s got and his flair will come later in the game for us.” 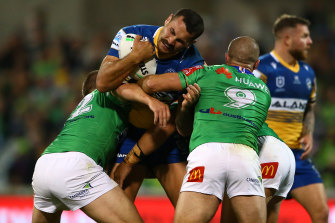 Reagan Campbell-Gillard can’t find a way through the Raiders line.Credit:Getty

Moses also figured three times in one of the tries of the season, a 60-metre effort completed by Shaun Lane.

“I knew my kicking game had to be big tonight and we just had to keep turning them around and kicking to the corners and come up with points when we get down there,” Moses said.

During the off-season, Moses sought the counsel of premiership-winning mentor Warren Ryan. This performance provided everything the “Wok” demanded and more.

There were plenty of other heroes for the blue and golds. Among them was Isaiah Papali’i, already shaping as one of the buys of the season. The back-rower scored two tries, one of them by steamrolling Josh Papalii. When Ryan Matterson finally comes back into the team after overcoming a concussion he suffered against Melbourne, it won’t be at his expense.

This from a Parramatta pack that failed to aim up last week against the Dragons. Even metre-eating props Junior Paulo and Reagan Campbell-Gillard couldn’t crack the century mark. RCG was desperate to make amends, clocking more metres against the Green Machine by half-time than he did in an entire match against the Red V. In the end, four Eels forwards brought up three figures.

Parramatta have been known as the offload kings, but didn’t once promote the Steeden in the opening half. Instead, they were rewarded for running straight and hard, ensuring their side scored 23 unanswered points in the second half.

In a match with so many wonderful individual battles, none had the fans on the edge of their seat more than Blake Ferguson-Jordan Rapana. Are there two more enigmatic players in the game? This was like watching Manu Vatuvei marking up against himself.

Rapana dropped the first kick of the match, allowing Parramatta to score from the ensuing set. He slid past Ferguson shortly afterwards to make amends.

And so it went. The Eels targeted Rapana with an assortment of kicks, Rapana targeted Ferguson. Despite themselves, both of them ended up making significant positive contributions.