A radical proposal to introduce an extra round to the AFL season in 2023 was tabled at Monday’s CEOs’ meeting in a move that could add $1 million to each club’s coffers.

The idea is based on the NRL’s “magic round” and would involve all 18 clubs playing nine games in one state with no home ground advantage, adding tourism dollars to state coffers and showcasing the game outside Victoria. 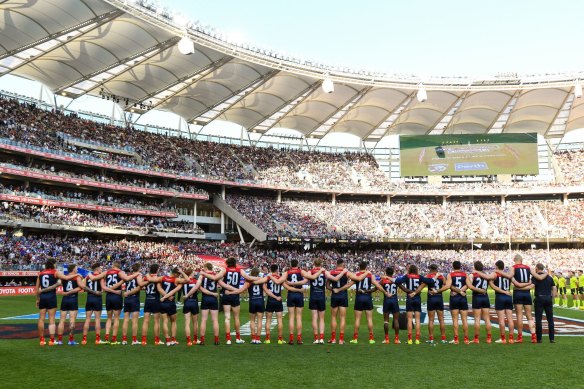 A magic round of football would have all teams play in the one state.Credit:AFL Photos

A club source said there had been interest from state governments outside Victoria about the proposal and AFL clubs from NSW, Queensland, Western Australia and South Australia were supportive of exploring the possibility. AFL CEO Gillon McLachlan confirmed The Age report on SEN on Tuesday morning, saying that the idea was alive.

The concept is still at the idea stage and would need to be incorporated into collective bargaining negotiations that are due to get under way soon and also discussed with broadcasters who just signed off on a record-breaking $4.5 billion broadcast deal that underpins the competition for the next nine years.

If the proposal is taken up, the season would run for 24 rounds with each team playing 23 matches. It would allow teams to play seven other teams twice.

There is a sense that the pre-season matches are meaningless other than as a tune-up for games played for premiership points and that an extra round that adds to the game’s coffers as it emerges from COVID-19 is worth considering, with McLachlan saying the round would be held during school holidays in the first quarter of the season.

The AFL is also hopeful that as it bounces out of COVID-19 it may be able to make a bigger imprint in other states via the extra round.

“We’ve got multiple states interested in doing it and got to the point with three states saying ‘yeah, we’ll do it. We’d love to have all nine games in this market,’” McLachlan told SEN.

“The members still get their 11 home games and it’s an additional one and we can come together as an industry and whatever state [it was held in] would have a different logic … we’re working through that with the clubs.”

In the NRL’s magic round, all fixtures are played at the one venue. The concept is seen as possible in the AFL after its experiences during the pandemic, when the league played multiple games at the same venue. The round would include a festival of football in the state where the game is played and McLachlan confirmed it could include triple-headers depending on the venue.

A league source said that although the idea was similar to the NRL’s magic round, it was necessary for the AFL to add an extra round because relocating existing games would not add extra revenue because each game is already valuable in its own right.

In putting the proposal to clubs, the league was looking for affirmation to explore the idea further and expected to know within the next fortnight whether it would be part of planning for 2023.

At the moment, AFL clubs play 22 games for premiership points plus finals with one bye mid-season and one pre-finals bye.