A monster Valentine Holmes field goal that sailed into the second tier of the Queensland Country Bank Stadium pinched a final-minute, 29-28 victory for the Cowboys against the Warriors.

Just when Holmes’ rival No.1 Reece Walsh looked ready to pinch the headlines for another week, Holmes’ right boot proved the difference yet again at the death. 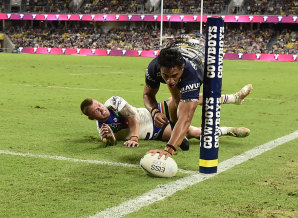 The Cowboys led 22-6 at the break but conceded four Warriors tries to trail 28-22.

Walsh, just 18, was again heavily involved in the fightback, including an 88m try where he somehow evaded the sensational chase by Heilum Luki. The rookie forward collared the little fullback, but he was still able to spin and plant the ball down.

Replays showed Walsh clocking just over 10 seconds, which was remarkable considering he was in a tussle with Luki before the try line.

Walsh also set up another second-half try and had a hand in a third as his reputation continue to grow in just his sixth NRL game.

Some Cowboys fans would have privately loved the fact Walsh was now carving up after somehow being let go by their Queensland rivals the Broncos last month.

Brown is clearly mindful of praising Walsh too much, and pointed out his first half was “a fair way off what we needed”, but the second 40 minutes was much better.

The Warriors held on to victory against the Cowboys earlier this month, but Holmes was in no mood for a repeat.

The Cowboys have now won three of their last four and will take plenty of confidence heading into the bye round. This was the same team that dropped their opening four games of the year. Holmes continues to improve each week at the back.

“The next two weeks, had we lost that game, would have been a tough time,” Cowboys coach Todd Payten said.

“It sets us up to have a break and decompress and re-energize physically and mentally and spiritually and be ready to come back and play Manly in Manly on a Friday night.”

Harris-Tavita deserved special praise for another bone-rattling tackle down low on Jake Clifford, which prompted Steve Roach to joke during the TV commentary, “check your dentures”. Parramatta rookie Jake Arthur was on the end of some similar Harris-Tavita low tackles during Magic Round.

Clifford and Scott Drinkwater both scored for the Cowboys leading into the break when Jazz Tevaga was placed on report for a second straight week and later sin-binned for a blatant hit from behind on Luki. Brown said those ten minutes were when the Warriors lost the match.

Clifford was emotional after full-time and expected to link with Newcastle in the coming days. Payten said: “There’s some water to go under the bridge. What I will say is he’s a terrific kid … whatever happens will happen. He’s a terrific young fella.”