The Wallabies side picked for the fourth Bledisloe Test against the All Blacks in Brisbane reflects who they are.

They are the No.7-ranked side in the world, with obvious questions about depth in key positions. 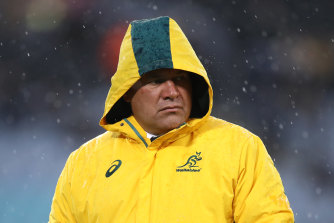 Dave Rennie likes to back youth and tinker with his selections.Credit:Getty

He is a genuine utility whose form on the wing last year was far better than most expected but he lacks the distribution game to become a Test No.10.

However, his defensive excellence will mean there are fewer moving parts in the Wallabies defence, as Marika Koroibete and Filipo Daugunu both appeared to spend time defending at No.10 last week with Noah Lolesio in the backfield.

Hodge will defend in that channel and it may be something of a tactical concession to the All Blacks in response to how they tweaked their attack in the second and third Bledisloes. 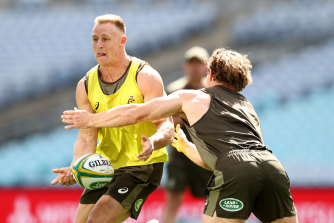 Reece Hodge knows he is not a serious contender for the five-eighth spot at the next Rugby World Cup.Credit:Getty

The All Blacks were just far more direct in Auckland and Wellington, using Jack Goodhue to charge at the No.10 channel,with powerhouse wing Caleb Clarke hovering on his shoulder.

Ngani Laumape and Rieko Ioane have replaced Goodhue and Clarke in Brisbane, but the Wallabies have been fully warned about what to expect from them.

So, there is a real logic to employing Hodge;s front-on defence against an All Blacks attack that has become noticeably more direct in the past two Tests.

Is it a defensive move? Unquestionably so. But it emphasises again how big the losses of Matt To’omua and James O’Connor have been.

No free passes should be handed out to the Wallabies on account of them being five weeks into a four-year plan, but it would be wilfully ignorant not to acknowledge how the loss of To’omua and O’Connor hurt them. Of the players they could not afford to be absent against the All Blacks, both of them would be in the top five.

If Rennie is scrambling a bit to cope with the loss of his main men at No.10 and No.12, the unforced selections of Angus Bell on the bench and Lachie Swinton at No.6 show Rennie as he is.

First, he likes to back youth, and second, he likes to tinker with his selections. Although he had some mainstays at the Chiefs, he made plenty of changes each week to the 23.

Bell’s selection hasn’t gained much attention but there is a risk attached. 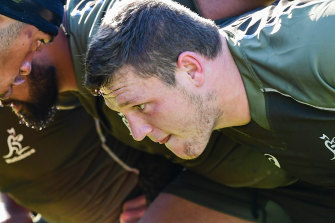 The selection of Angus Bell appears to be a Rennie special.Credit:Stuart Walmsley/Rugby AU Media

The Waratahs loosehead is going to be a terrific player but he is 20 years old.

It’s debatable whether he has done enough at Super Rugby level to nail down his place, never mind at Test level.

James Slipper has done a good job in the first three Tests, and both sides have enjoyed strong moments at the scrum, but the All Blacks will be looking at Bell as a potential opportunity in the second half.

Bell is likely to lock horns with Tyrel Lomax, the Rebel-turned-Hurricane, and you don't have to be a set-piece to understand the advantage Lomax has: time.

'There should not be a lack of accountability for the unforced choices Rennie has made in his fourth game in charge.'

Lomax is 24 now, and has strong back-to-back campaigns at the Highlanders and Hurricanes under his belt.

He is not yet at his peak but he is maturing well as years of conditioning and scrum work add layers to his natural ability and size.

There is nothing to say that Bell is a ‘worse’ player than Lomax – in fact, his ball-carrying potential is better – but the Waratah simply hasn’t had the same opportunities to grow on account of his age.

Lolesio was burnt last week because he wasn’t quite ready to handle the step up, and Bell is in a similar category. While Rennie’s hands are tied to a high degree at No.10 and No.12, he is on the hook with Bell’s selection.

That also applies to the loose forward merry-go-round, which continues this week with Swinton to start at No.6.

He has some rugged qualities that should translate well to the Test arena, but there is every chance that Rennie just doesn’t know what his best back row is.

There’s a real confusion about what the Wallabies are trying to achieve in terms of balance, with Pete Samu, Ned Hanigan and Swinton offering such different qualities, and the swapping of Liam Wright and Fraser McReight on the bench adds to the inconsistency.

How to judge a Wallabies success?

That’s simple: regardless of the result they have to be competitive for long periods, defend the maul with more conviction and be patient with possession.

Those are not outrageous demands to make of a Test side that, despite Rugby Australia’s known financial issues, continues to be well remunerated and employs a coach on a significant contract.

The loss of To’omua and O’Connor hurts, handing Rennie a Hobson’s choice at No.10.

However, that should not mean there is a lack of accountability for the unforced choices Rennie has made in his fourth game in charge. Sydney was bad. Brisbane has to be better …