Latrell Mitchell, one of the most influential Indigenous voices within his community, is going to pay another huge price for the tackle that shattered Joseph Manu’s cheekbone with the NRL set to rule him ineligible for next year’s All-Stars match.

As Mitchell prepares to start a six-game suspension for a tackle that left former teammate Manu with severe facial fractures, the NRL has confirmed a clause in the judiciary code will stop the South Sydney ace playing in the exhibition.

Matches such as the All-Stars and Charity Shield have typically not counted towards a suspension which carries over from one season to the next, meaning Mitchell could have returned to the rugby league field before round one.

But the NRL is likely to determine Mitchell’s offence is above a threshold meaning he won’t be able to play in pre-season fixtures.

Mitchell was charged with a grade two reckless high tackle for his hit on Manu, an incident that has ended the season of both players.

Mitchell has been a colossal figure in the All-Stars concept, taking a powerful lead in promoting health and education messages throughout the Indigenous community in the week-long celebration of both his and Maori cultures. 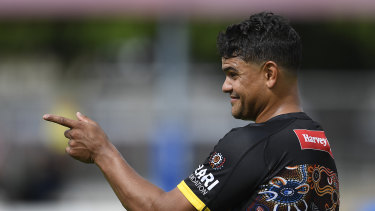 Latrell Mitchell is one of the most influential Indigenous voices within his community.Credit:Getty Images

Mitchell even asked his former club the Roosters if he could stay in Australia in the 2019 pre-season to play in the return of the All-Stars concept instead of travelling to the United Kingdom for the World Club Challenge. The Roosters granted his wish.

And now Mitchell has learned he won’t be able to feature in a game he considers one of the most important on the calendar.

“He’s been magnificent,” Indigenous All-Stars coach Laurie Daley said of Mitchell’s contribution to the concept. “He’s a great leader, a real presence within the group – and he’s the one they all gravitate towards. They want to be around him. 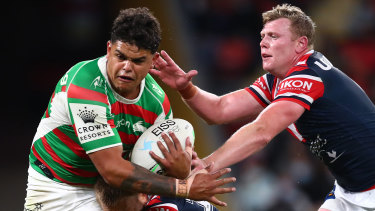 “He’s able to stand up for what he believes in and he’ll stand up for his people. He’s a very strong man and I think he’s developed into a great leader.”

The number of games the South Sydney superstar misses at the start of the regular season next year under incoming coach Jason Demetriou will depend on how deep the Rabbitohs go into this year’s finals series.

But undoubtedly Wayne Bennett’s longtime assistant would have been hoping his biggest attacking weapon would have had some football under his belt before he returns from a suspension.

The 24-year-old found a strong advocate in Timana Tahu, who defended Mitchell’s character after criticism stemming from last Friday night’s clash against the Roosters.

He’s able to stand up for what he believes in and he’ll stand up for his people. He’s a very strong man who’s developed into a great leader

Tahu has previously warned Mitchell could be driven away from the game, a message only heightened after it emerged his family had received online threats after the Manu tackle.

“If he doesn’t listen to the outside noise, I think he should be right,” Tahu said. “When you get death threats, he wouldn’t be sleeping well and nervous thinking about that.

“But for him leaving the game, he’s playing too good [a brand] of footy to be leaving. I think he has a burning desire to win a GF with South Sydney.

“I feel like people jump down his throat a little bit too quick. My opinion is that Latrell plays aggressively … for Latrell to be called a grub, he’s not a grub. He’s passionate and for him to be calling him a grub, they shouldn’t be judging him.”