Willis scored one of his side’s four tries and produced a crucial steal on his own line in a finely-poised third quarter, the highlights of an accomplished display that enhances his prospects of figuring in Jones’ autumn plans.

The 23-year-old was poised to make his Test debut in South Africa two years ago only for a serious knee injury to stall his stunning early progress, but his return to form and fitness is putting pressure on England’s established flankers Tom Curry and Sam Underhill. 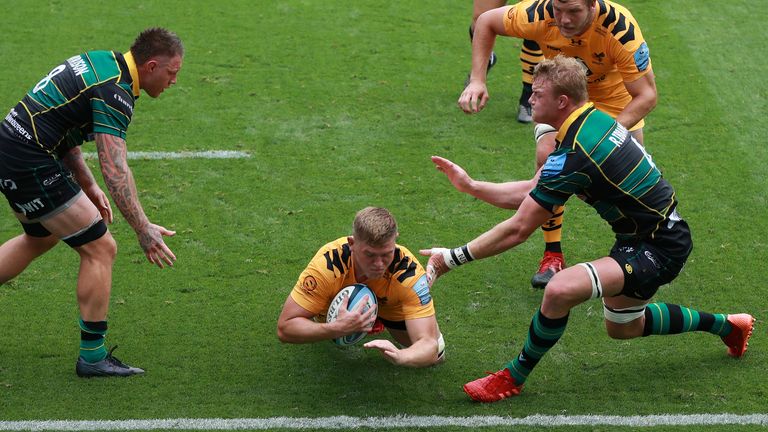 He was helped by a virtuoso Wasps as the Premiership’s otherwise uninspiring opening weekend after a five-month interruption caused by Covid-19 finally produced some fireworks.

Willis’ back-row colleague Thomas Young was named man of the match, while former England international Brad Shields also shone at No 8 in the bonus-point win that was signposted early on. The absence of fans at Franklin’s Gardens meant Dan Biggar could be heard repeatedly reading his team-mates the riot act as Northampton’s defence cracked with alarming ease to enable Josh Bassett and Willis to cross inside the opening quarter.

“It’s too easy, we can’t allow it,” the Wales fly-half warned as Wasps raced over for the opener from a scrum move that saw Jacob Umaga link expertly with Jimmy Gopperth as Bassett roamed off his wing and through the middle of Saints’ splintering midfield.

Four minutes later, Biggar was incensed once more when Dan Robson broke from his own half to initiate an attack that ended with Willis powering over. Two Biggar penalties gave Saints reward for spending most of the opening 30 minutes in the opposition half but the frailty of their defending undermined their control of territory and possession.

A pair of crunching hits by Malakai Fekitoa on Fraser Dingwall made their mark but the second was deemed high and resulted in a yellow card for the All Black centre.

Northampton were unable to capitalise on the extra man and instead were opened up when an offload by Shields sent Umaga over, only for referee Karl Dickson to spot a forward pass.

Saints drew first blood early in the second half with wing Taqele Naiyaravoro taking the ball up the middle from a scrum, sucking in players to allow Alex Mitchell to grab and dot down from close range to cut the gap to 14-13 and blow the game open.

The energy was quickly sucked out of the Northampton comeback, however, when a series of forward drives ended with prop Ben Harris burrowing over before a Lima Sopoaga penalty propelled Wasps into a seemingly commanding 24-14 lead.